Forced Vaccinations- This Isn't About Measles 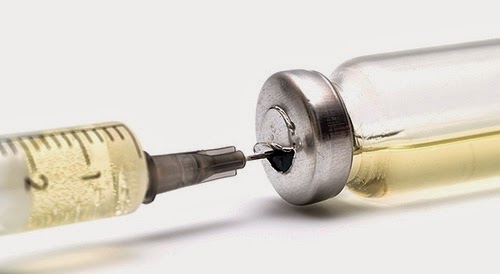 I read that the two senators in my home state of California will be pushing a bill forward removing vaccine exemptions for children. This will essentially force vaccinations for children to enter public school. Frankly, I am horrified. I try not to be riled up by stuff like this, but mandatory vaccinations?

Am I horrified because I think vaccinations suck and kill people and cause autism? Actually no. I don’t really think any of those things. I am horrified that the state/government/hysteria etc. would even consider that mandatory vaccinations is anything other than morally reprehensible and a clear flip of the bird in the faces of individual medical rights.

I believe (and I like to think that you do too) that parents should have a right to raise their children in the way they best see fit. This includes and covers things like freedom of religion, medical choices, and teachings within the home.

If you think this vaccination legislation has anything to do with Disneyland or measles, you are quite mistaken and you have most certainly become drunk on the measles hysteria Kool Aid.

There is an old saying about how if we do nothing when those in power try to take the rights of our neighbors, then there will be no one left to protect us when it comes time for our own rights to be taken.

To turn this around for a moment, lets talk about forced vaccinations in a different way.

Let’s say for instance that eating fast food, puffy cheese flavored snacks, jelly beans and basic “crap” food is bad for you. Let’s say that we can prove this with science. People that eat junk food get more diseases like diabetes, cancer, and heart disease. Let’s say that that they take more than they give in regards to medical insurance.

Let’s assume for a moment that our tastes and the foods that we prefer are learned in childhood and that we could prevent the eating of crap food and the associated diseases that come with it, in adulthood, by changing the way we feed children.

Changing the way children eat would be a huge benefit- not just to them individually, but to the society at large today and 50 years from now. Children that learn to eat well (what the heck, why not organic!?) will be adults who eat well and require less medical care as they enter their 40s, 50s, 60s and social security years.

The evidence is clear, the epidemics are widespread and EXPENSIVE as all get out. It is time to do something about it.

We need to start forcing children to eat well. If their parents don’t comply and continue to feed them Happy Meals and Cheetos, they will be prosecuted. There will be no exemptions. After all, the unhealthy among us hurt everybody so to allow any individual to be exempt from healthy food (especially as a child) would be damaging to them and future generations.

If parents don’t comply then action must be taken. The children can be prevented from entering public school. Public schools have standards that keep everyone safe. After all, if a child comes to school with a soda in his lunch he MIGHT share it with his desk partner and then THAT child could get diabetes someday or develop a taste for corn syrup (I hear it is even addictive). This could most certainly end in disaster.

Sure, people have individual rights, but not when they can damage and harm the group as a whole. We want ALL the children to be safe. Those that don’t comply can keep their kids out of public schools or face charges. Keep the number for CPS on hand. Station patrols at popular fast food outlets. Test blood sugars regularly.

Expect medical doctors to enforce this rule. Institute detailed checklists that must be covered in visits so that they can make sure that they have maximum patient compliance. In fact, make medical doctors liable if parents are dumb enough to feed their kids jelly beans. I mean, if they allow those lunatics (who don’t care about their children or the rest of us) to be part of their practice, then they are part of the problem and thereby encouraging awful and harmful behavior.

First do no harm.

Sure, there will be celebrities who bestow the merits of the friendly, ticklish fizz of corn syrup laden drinks. Some few, ignorant, and easily swayed, WILL fall for their witty banter. You can’t expect everybody to give a crap about their kids.

Seems like a great idea, right? Healthier kids, healthier adults, lower social costs, muscular senior citizens. Sure, the compression sock industry and dialysis companies will take a hit, but somebody has to sacrifice.

Now I hope that no matter how much you love organic food and detest corn syrup that you see the error of this way of thinking. Just because something isn’t good does not mean that the government should force people to comply, even with their children. Of course we need some checks in society. People do some awful things and hurt their children intentionally. They abuse them and kill them. Some people harm their children just because they are misguided. We must have protections for these children.

But choosing not to vaccinate a child (or choosing to let a kid have a soda) is not a choice that the government or public opinion has any right to punish. No, not even if there is a sketchy weekend at the happiest place on earth. Not even then.

I am not going to tell you what I think about vaccines or the status of my children. You can guess all you want. But I don’t think it matters, quite frankly. I respect the right of parents to vaccinate or not vaccinate their children. I respect the right of a mother to breastfeed or bottle feed her child. I certainly don’t agree with all of those choices. I most definitely will do all I can in my power to work to educated people so that they make the choices that (I think) are best for their children.

But there is something very wrong with taking away the right of a person to make their own stupid choices.

But don’t you dare take away their right to make a choice for themselves and their medical care- no matter what the herd is doing.

Heaven forbid we live in a country where the government (by push from the people) dictates to me what I can and cannot put into the body of my own child.

This is not a one stop bus. Oh no. When you start this trip then it keeps going and there are no brakes. What comes next? Should homeschooling be illegal? I have met some really awkward homeschooled kids. We don’t want that! Home birth? That ain’t safe! All doctors know that home birth is for people with rocks in their head! For the sake of babies that should be illegal.

And the ride keeps going, until someday, the rights taken are not from you neighbor with her silly views and her Jenny McCarthy obsession. No, someday they will come for you.

Yes, I sound a little fatalistic. Well, Cowboy, I am feeling a little fatalistic. I can’t believe the idea of this could even be entertained. The right of a parent or anyone to make medical choices for themselves must be protected. What is next? Maybe we should force people with cancer to undergo treatment XYZ, because everything else is just not proven to work?

Don’t let this happen, even if you think that vaccinations are one of the greatest inventions ever. They very well may be one of the best things to happen to the world. They have saved countless lives around the world and will continue to do so. But if we want to get more people to vaccinate, you don’t require it by law. You teach. You educatate. You actually LISTEN to the concerns of vaccine hesitant parents. You don’t force them. You don’t make it near impossible for them to find a physician who will actually see them. You don’t make it difficult to put their kids in school. All of these things further marginalized people that are starting to get a little scared.

Forced vaccinations are not the way to increase vaccination rates. Listening to parents and their concerns is the way to create change- and if it doesn’t have the impact you want, then let them be. Education and empathy will do a lot more than force in this fight.

Be kind. Remember that there are never rights that belong to “other people”. There are only human rights, and when one group loses them, we all do.

The two senators sponsoring this legislation in California are:
Benjamin Allen (contact page)

or you can call or write :

Zacademic said…
I'm sorry but equating vaccine requirements with legislating food choices is off-base. Public safety and health have long been deemed valid exceptions to freedoms/rights, including free speech. There is no slippery slope or nefarious government agenda. It's about figuring out the best policy that benefits the greatest number of people to protect public health. And there is a real risk that doing nothing leads to people being worse off. If there were no risk, your argument would be valid.
February 6, 2015 at 7:28 PM

Unknown said…
This affects ALL children, not just your own. But you're right, it's not about measles. It's about measles AND mumps AND rubella AND pertussis AND tetanus AND diphtheria AND varicella AND HPV AND polio AND hepatitis...
February 6, 2015 at 9:46 PM

Mama Runner said…
What about this comparison: "If you own a gun, your child could take it to school and open fire. Gun ownership isn't just a personal choice, it's a public health and safety issue. Parents shouldn't be allowed to own guns, and if they're stupid enough to get one anyway, their children shouldn't be allowed in school."

Or how about: "Drivers might hit a child with their car. It's a public health and safety issue. No cars!"

Rin said…
Your argument is not quite good enough. Sure eating unhealthy food is bad for you and will affect your child but not vaccinating your child affects all the other kids too because of herd immunity. I think it's a good idea to have compulsory vaccinations for public school. If you choose not to vaccinate your child then you can also choose to educate them at home and keep all the other kids safe from their diseases.
February 8, 2015 at 4:58 AM

Sarah said…
"Forced vaccinations are not the way to increase vaccination rates. Listening to parents and their concerns is the way to create change- and if it doesn’t have the impact you want, then let them be. Education and empathy will do a lot more than force in this fight."

THANK YOU. Well said. My pediatrician basically said the same thing to me, believe it or not. After he mentioned that he could not dismiss parent's questions, concerns, or requests for delayed schedules since the changes in the last 20 years (schedule, additions, ingredients etc.) should raise questions and concerns from informed, educated parents.
March 1, 2015 at 4:23 PM

JuneBlossom3 said…
I am a physician and a vaccine advocate. However, I support pt autonomy as well. When we mandate medical treatments where do we draw the line?
March 12, 2015 at 10:44 AM

Holly Scudero said…
My child, my choice. The fact of the matter is that there is a risk of vaccines causing harm, although there is much debate over how large or small that risk is. But most people recognize that there IS a risk, and therefore it is absolutely wrong to force parents to vaccinate their kids. Vaccination is a decision that belongs solely in the hands of parents. It should not be decided by the government.
July 1, 2015 at 7:04 AM