Flying With Baby- What Could Go Wrong?! 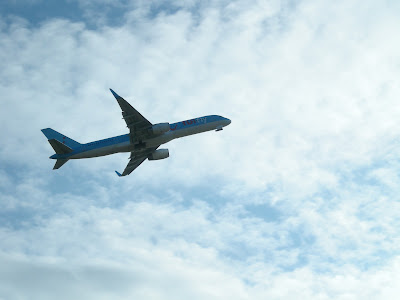 Can I just begin this post by saying that one of the most awkward and perhaps exhilarating experiences of my life must be going to the bathroom in an airport with a twenty pound baby strapped to my back via an expensive baby carrier?  The burning desire that nothing go wrong or splash excessively is only intensified by the looks people give you when you enter a bathroom stall with a baby on your back and exit with that baby still on your back.

But back to my story.

I was heading out to Dallas TX for another natural childbirth educator training and taking sweet baby with me since she is still nursing.  I made it to the airport in San Francisco without event and hopped on the plane.  I have actually traveled with babies quite a bit and have never had a problem.

Once we got going the screeching began.  Don't worry, most everybody on the plane was fast asleep so I am sure they didn't notice anything....

I think her ears were hurting and the combination of pressure changes and new teeth was simply too much.  I nursed her.  (By the way, no matter how much I claim to support "nursing in public" there is something incredibly awkward about trying to nurse a screeching 15 month old while pancaked against a male stranger as my squirming toddler tries to kick his computer off his tray.  I have to say that it was one of those moments that a hooter hider sounded real good.  Being able to afford first class sounded even better.  In fact a pitcher of children's NyQuil sounded best of all.)

I was one of those moms.  The mom with the screaming kid she can't control who can be heard throughout the plane.

In theory I realize that it isn't her fault and that people understand that you can't always make a child of that age be quiet.  But theory is different than practice and in addition to feeling awful for my baby I was incredibly embarrassed that I was disrupting everybodies flight zen.

Did I mention that this wasn't just crying or fussing.  It was full boar SCREAMING.  Red faced, tears streaming, uncontrolled screaming.

At one point I actually locked myself in the bathroom just hoping that it would muffle the sounds of horror for just a few moments for my fellow passengers.

I kid you not the screaming lasted for over half an hour.  Miraculously, while locked in the minuscule toilet room I put the baby down and she actually STOPPED.  Sure, she may have found something weird on the floor that she played with.  (Yes, I let her play with bathroom floor trash.  I was that desperate.  I actually cried too.)

We emerged and a kindly flight attendant gave us some crackers and cheese.  I kept her stuffed the rest of the flight and left a horrendous mess for the kind flight attendants to clean.  THANK YOU- from the crazy mom in seat 26B!

But we made it intact to the great state of Texas and were not even arrested upon landing.  Giant sigh of relief.

The birth teacher training was FABULOUS!  (Post coming on that soon!)

I did however live in a constant state of dull dread that the return flight to California would be as or slightly more painful.  But somebody suggested a truly progressive idea to me- CANDY.

I couldn't find lollipops so I went for a jumbo bag of Good N' Plenty and a jumbo bag of Fruit Snacks (AKA horse hoofs, corn syrup, and food dye) to appease her.

Security was interesting.  The baby was fast asleep in her Ergo and the TSA security folks tried to let me though without waking her up.  They REALLY tried.  Alas the metal on her overalls kept setting off the alarm and I had to take her off and wake her up.  Still I have to say that the TSA folks were super nice and one of them now knows how to assist a mother with baby carrier straps.

I have to say that it worked pretty well.  Sure there were some awkward "Do you mind if my baby kicks your Kindle while she sucks on my boob?" moments but that was to be expected.  (Why on earth do I ALWAYS end up sitting next to a man?  Always.)

I got to watch the in flight movie- "What To Expect When You're Expecting".  It was surprisingly good.  (A twin vaginal birth!  WHOOT!)  I was the one sitting in the airplane chair with the headphones on laughing hysterically at all the jokes while the teenager next to me tried to focus on reading and not looking and my pendulous breast.

By the time we arrived there was minimal screaming, a floor covered in half eaten pink liquorish (I really love Good N' Plenty).  Yes the baby was actually STICKING to her baby carrier and probably received enough sugar to seriously increase her chances of adult onset diabetes.

But we arrived in once piece, though an hour late.  I missed my bus and had to take the last one of the night.  I finally arrived back home at four AM in one piece.

It was pretty much all worth it to see the baby curl up with her daddy and go right to sleep.  There is not much that compares to a good daddy and the baby that loves him.

I wish you all luck in your future travels with children.  I can assure you that if you are feeding your kids pure sugar and/or alcoholic cough syrup that I am internally giving you a big thumbs up.

momto5 said…
lol, you poor thing. your poor baby.
i remember one flight i took with my oldest when she was two and no longer nursing. good night, she fussed and climbed all over the seats and i thought i would lose my mind. and the flight from portland, ore to phx az took like 6 hours because i had to take the cheap flight, and it was a red eye. and we had to stop in vegas and the people who sat next to us started getting busy.
September 17, 2012 at 12:30 AM

Mary @ Better Than Eden said…
Oh my goodness...we are leaving TOMORROW to take a 2 week "adventure" (I refuse to call it vacation) out west with FOUR children. I'm slightly terrified of the plane ride. I've flown with two children by myself but I have a bad feeling about this one. Open to drugging (can't believe I just wrote that) but I cannot figure out what people are using for infants when every bottle of nyquilish stuff I see says six and over...any suggestions???
September 17, 2012 at 4:04 AM

Unknown said…
at Better Than Eden... my sister in law uses melatonin drops for her 7, 6 and 4 year old to help relax them. Her MD does not suggest using the drops under age 2, but I don't believe that there is any high risk using them sparingly. Melatonin is just a natural relaxant... I dont know if it will help with pressure due to flying...but you could try it out maybe?
September 17, 2012 at 6:47 AM

Unknown said…
at Better Than Eden... my sister in law uses melatonin drops for her 7, 6 and 4 year old to help relax them. Her MD does not suggest using the drops under age 2, but I don't believe that there is any high risk using them sparingly. Melatonin is just a natural relaxant... I dont know if it will help with pressure due to flying...but you could try it out maybe?
September 17, 2012 at 6:47 AM

MelissaH said…
I'll sum up my worst flying experience - me, alone, 3 kids, youngest 13 months. Vomit, diarrhea, washing my shirt out in the plane's sink, so thankful I brought a sweater on the plane. Ended up with a souvenir shirt from the layover city.
Ah, motherhood! They sure didn't cover that in birth class. :-)
September 17, 2012 at 10:09 AM

JuliPickle said…
I was wondering how I happen to be the only one who travels with relatively happy kids (a 2 year old crying because he was scared of taking off doesn't count, k?) and then I realized... it's because I've been using candy all along, I thought everyone knew that trick. :) It helps that my kids rarely ever get candy so it's a *huge* treat for them that they'll do absolutely anything for it. Including sitting quietly on an airplane.
September 17, 2012 at 11:54 AM

Paula -- CutieFruity said…
The worst day of my life was flying alone cross country with 3 kids 6, 4, and 18m. They were tired, over stimulated, pent up on planes and airports for the entire day. My 3yo threw a book at the people behind us, dirty looks galore, whining, screaming. The thing is, the adults on the plane acted almost the same way! But they are big people who should be able to manage by now. Thankfully there were other parents on the planes who were compassionate and helpful. I propose that terminals need playgrounds.
September 17, 2012 at 2:56 PM

Anonymous said…
The girls here in Texas appreciate so much all the sacrifices that you made to share with us your passion for natural childbirth , thanks!
September 17, 2012 at 7:51 PM

Darla said…
Thanks for posting this.
I just had the worst flight of my life a few weeks ago from Tampa to Columbus. At least it was only 2 hours!
My 21 month old son screamed red faced murder 95% of the flight. We had candy, not enough though, and he had a bad cold...which I am convinced he caught on the plane ride down to Florida from another sick child (our kids were great on the flight down!).
We got horrid looks. A woman four rows up kept turning around and staring at my son like we were abusing him. His ears were killing him and no matter what we did... ibuprofen, chamomile drops, candy... nothing helped!! He was kicking the seat in front of us and the guy in the seat was jerking around furiously. There wasn't enough room to stop him from the kicking, my son was flailing in my arms. Nightmare, such a nightmare.
I actually bought alcohol on the way home and drank three nights in a row at home and I am not a big drinker.
So glad that's in the past.
September 17, 2012 at 9:37 PM