Oh my gosh!  You get four birth stories in one with this blog post and they are amazing.  All so different and so much to learn from each and every one of them!  Love IT!
Enjoy! 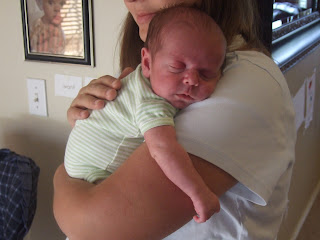 -What made you desire a VBAC when they seem so hard to come by in the current obstetric climate?

A little research was all it took to understand the risks of repeated c-sections vs. the risks of VBAC. Uterine rupture rates, the thing they use to scare you, are very low. In fact, they were just coming out with studies showing the risk of rupture after 2 c-sections was only 1-2% greater than in women who'd never had a c/s. Really not bad odds. Also, I still had a strong desire to experience natural birth!

-How did you find a care provider who would support you?
I was so lucky. For baby #3, I went back to doctor #1 and told him of my VBAC desires. He was very supportive and said he was the only doctor in the region willing to let you attempt after 2 c/s. He said he had patients coming in from neighboring states because no one would was willing to let them try. He didn't gloss anything over but knew the current research, and was willing to take risks despite the insurance companies and potential lawsuits. He told me a great story about a patient of his who attempted VBAC 7 times and was finally successful on her 9th baby!! I was highly encouraged.

With baby #3, I was all kinds of nervous! I told everyone (including my doctor) that I was actually a week less than I really was, so they wouldn't pressure me into an early induction. I started having contractions the night of my real due date. They tapered off towards morning and I was able to sleep some. This continued for the next three nights. I was TIRED. That day (3 days after my real due date) I had contractions on and off throughout the day, starting to pick up at night. I was disgusted because my husband decided to clean out his part of the closet that day, which effectually kept him as far from his laboring wife as possible! He had a lot of fears as well. Luckily my mom was supporting me through it all. Things started to get really hard and I remember saying, "I can't imagine it getting much worse!" and my mom saying, "Oh, just wait." I had such sharp pain in my cervix during each contraction and there was nothing I could do to get more comfortable.
I tried taking a shower and was mad that all it did was give my crazy hair for those first baby pictures; it didn't help at all. We finally headed to the hospital and that 5-minute car ride was AGONY. I could not sit during contractions and had to kneel on the seat backwards. We got to triage and the nurse checking me said, "I'm so sorry, I know I have short fingers." Her check sent me crawling up the bed. I was like, you are in the wrong line of work lady! She said I was 2-3 cm. That was terrible news. I had to stay in triage with a monitor to see if I would progress in the next half hour or I would have to go home. I knew there was no way I could go home. I was in so much pain!
Finally another nurse came in and checked me, and I think she was being merciful when she said, "Um, I think you're a 4." So I got checked into my room, and they asked me if I needed anything for pain and I said, "Epidural. NOW!!" My mom was shocked as that was not a part of my birth plan, but I knew I had had enough and my fears were preventing me from relaxing the way I needed to. That epidural was beautiful. I could still feel every contraction, they just didn't hurt any more! I could move my legs and even felt like I could walk, though they thought it necessary to tell me not to try :)
About 6 hours later I was completely dilated, but the doctor (who ended up being my doctor's partner on call that day - disappointing, but at least he didn't say anything about the double VBAC) was called out to do an emergency c-section, so they told me to just hang out until he could get back. I figured pushing would probably take a while so I started doing little practice pushes during contractions, just to get things stretched out and hopefully prepared. A couple hours later the team was assembled and I started pushing. Everyone seemed pretty impressed with how effective my pushes were, so I was proud.
After about an hour I said, "OK, here he comes!" and everyone was like, "No, wait!!!" I was pretty indignant that they didn't realize how close I was and were just standing around chatting while I'm actually trying to get work done. They still hadn't broken down the bed, doctor wasn't geared up, etc. They told me to lift my bottom so they could get a new chux pad underneath me, and I was like, "Ha, yeah right!" I was a little busy trying to hold baby's head in because they didn't do their job right! So they just shoved it under my butt - youch. Finally they're all assembled, and the next push brings his head out, and one more and he's all the way here. The doctor said, "Are you sure you've never done this before? You're a pro!" 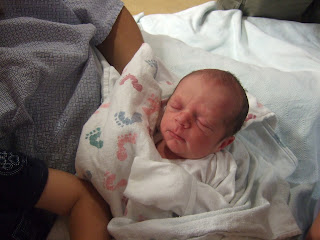 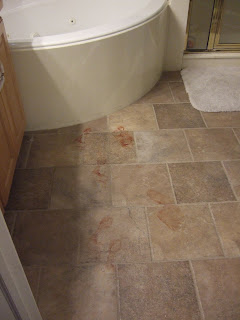 We got an ambulance ride to the hospital with all the school traffic (and got to pay for it twice since there were 2 of us - lame!) and they took the baby and checked me. I had a little tear that the doctor wanted to stitch and I said "No thank you - it's not gushing and I feel great." He huffed a bit but left me alone. I took a shower and then they took me in a wheelchair to the nursery. That was the first time I got to go to the nursery so that was neat. My baby was laying there and as I looked around I realized how tiny he was compared to the other babies.
He was only 5 lbs 12 oz. I noticed he had several pokes and asked why and found out they had run every kind of blood test to figure out what was wrong with this baby to dare to be born small and at home! He was completely fine in every way. We soon went to a recovery room. I felt great; I remember thinking, "OK, so what else are we doing today?" It took my husband 4 hours to get kids ready and over to another sitter, then call into work and reschedule meetings and appointments he had that day. (He had told me earlier that any day except THAT DAY would have been OK to have the baby :)) He finally showed up with my camera and phone so that I could call people and tell them the news! I was so thrilled with everything. It was the most amazing, easy birth and I felt empowered and ecstatic. The nurses still kept bugging us all night (and several came to hear my crazy home birth story) so the next morning we checked out and went home. I felt great. I didn't even have swelling, and baby was a great nurser. He was so cute and tiny, in his baby monkey way.
Baby #5 is due in 4 weeks! This time I am planning on an assisted homebirth with a wonderful midwife. I am hoping for a similar labor, the only difference being cutting out all the yucky hospital stuff and just staying home! I feel very blessed to have had so many different births! I have learned from each of them and treasure both the experiences and the children :)