Another amazing installment in our VBAC interview series.  Another mother who accomplished what many call impossible- a vaginal birth after four c-sections.  Yes it can be done.  Yes women are amazing.  Yes birth is beautiful.  Yes, yes, yes!
Enjoy- 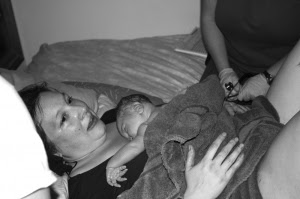 -So, I would love for you to first give a brief rundown of your first births and what you feel like happened and why you had c-sections.

My first baby was born via c-section after "failure to progress". My water broke at home 2 days after my guess date and being my first baby, I was in a hurry to get to the hospital! I now know better - I should have waited for active labor to begin because once they admitted me, I was "on the clock". Contractions started slowly, but of course, I was progressing too slowly for the nursing staff and was put on pitocin - to "get me in a more regular labor pattern". Of course after hours and hours of pitocin with a posterior first baby made for a long, painful labor. I eventually agreed to an epidural and ultimately, a c-section. I was devastated.

With baby #2, I wanted to try again for a natural, vaginal birth. I felt that now that I knew what labor was like, I could "do it better". However, I was induced via rupture of membranes a week before my due date and baby just wasn't ready to come. It was another slow labor, made worse by an epidural, and when the baby's heartbeat started to give them "non-reassuring" tones on the constant fetal monitor, it was game-over and an emergency c-section.

By babies #3 and #4, while I really wanted to try again, I couldn't find a supportive care provider and part of me was really convinced that I was broken. That my body was incapable of birthing the babies it carried.

I do blame the interventions, the lack of being able to labor at my own pace and the overall atmosphere at the hospital I was at for the resulting first c-sections, but ultimately, I blame my lack of knowledge. If only I had known then what I know now about birth, I truly believe I never would have ended up with that first c-section. I would have waited longer at home, I would have denied the pants out of the pitocin, LOL, and I would not get the epidural. I would have eaten and drank in labor, I would have moved around however I wanted, and I would have hired a doula and made everyone else stay out - especially the pesky nurses who insisted on frequent vaginal checks.


-What made you desire a VBAC after your 4 c-section's? This is almost unheard of these days.

I wanted a VBAC for baby #2 because I knew it was the safest choice for me and my baby. Once I did my research on VBAC, I discovered that the risk associated with a VBA4C were risks that paled in comparison to the risks of a 5th c-section.


-How did you find a care provider who would support you?

I called all the local midwives in my area and talked to anyone I could think of who would have a link to the birthing world. Thankfully, I live in an area where midwives are becoming more popular and was able to find some that would support me 110%.

Amazing.  :)  We had a homebirth so I was in the comfort of my own home, in my own clothes, eating my own food, controlling my own environment. I had 2 days of prodomal/early labor and by the evening of the 2nd day, I knew it was "for real". At 9:30pm, I had to wake my husband to help me get through my contractions and then by 11:00pm, my water broke with an audible 'pop'! The midwives arrived at midnight and baby arrived just a few minutes before 4:00am. I was louder than I thought I would be, but the beauty of being at home was that it didn't matter! I moved in positions that my body told me to move in, I labored on my bed, in the pool, on my hands and knees. I actually enjoyed the pushing phase. We have video of me and I'm chatting between contractions - although during contractions I was all business. It was just such a different feeling for me once I got to push.


-What helped you do this?

My faith. My sister-in-law. My husband. Having care providers who actually trusted that birth is just a normal physiological process and who trusted ME to be able to do it.


-How did you prepare for your VBA4C?

I read everything I could get my hands on regarding birth. I scoured YouTube for all of its "natural birth videos" for hours on end. I lived, breathed, and dreamed BIRTH. It consumed me. I lost sleep. LOL  But it was worth it. Because the night I went into active labor, I had one moment of fear when my water broke, and then after that, I was overcome with peace and confidence.


-Describe your VBA4C birth story. We would LOVE to hear about it!


- Has the postpartum experience been different than your other births? What about it surprised you?

My postpartum experience was tremendously different than my other births. I always used to joke that I had no idea what meconium was because during those first days of my babies' lives, I never once changed their diaper. I was always laying in a bed or sitting in a chair, too sore to get up. I've also had a much easier time breastfeeding. While I've always ended up having successful breastfeeding relationships, they always started up rocky. Sore, cracked nipples, plugged ducts and mastitis. It was always a long road. After this birth, I had no soreness, no problems. We nursed within a few minutes after birth and had a comfortable latch right from the start. What surprised me, however, was how sore my bottom was afterwards. LOL I figured I would be a little tender, but not as sore as I was. I was a bit of a mess down there afterwards, but I would obviously take that over another incision.  :)

Anonymous said…
These interviews just make me want to jump for joy for these awesome moms who EDUCATED themselves and beat the odds. They give me faith in the power of the female body and mind. I love this!!!
August 11, 2012 at 6:51 AM

Unknown said…
I am also pregnant with my fifth baby and desire a vbac. My doctor has already told me it is very unsafe but statistics show it poses no more danger than a repeat c section. I talked to the only hospital who will let me labor as a vbac in Texas. I pray everyday this birth experience will be beautiful. Your story is very inspiring.
December 22, 2013 at 7:38 PM