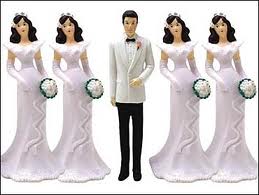 So, I have four kids.  This is pretty awesome.  It is also pretty exhausting.  And sometimes somewhat isolating.

Thankfully, I have discovered a solution.  Polygamy.  Yup, I think I need my hubby to get a few more wives.

Think about it ladies.  Imagine the possibilities.

Say you want to go back to school- you can work out childcare with the other wives (doula work, even midwifery!) You get sick, but there is always somebody else to help out with dinner or sweeping or taking care of the kids.

Daily adult interaction, built in friends for your kids, help around the house, sick days, someone who understands what it is like to recover from childbirth, date nights (though you have to admit, it WOULD be awkward for your husband's OTHER wife to watch the kids so you could go on a date with him....), really, the possibilities are endless.

Yes, polygamy may fix my life.

Maybe you are thinking, "That isn't necessary, there are lots of ways to get help and relief without extra wives."  But you would be wrong.  Here are the other options:

A) Family help- Have I mentioned that I live with my mother in law?  I think she hates me.  Shocking, I know.  But it isn't just me.  I read a book about a traditional Asian family when I was studying Anthropology in college- a lot of people don't give rave reviews when they live with in-laws.  Living with family, though helpful at times, can have a down side.

B)  Hired help- This would be great.  The downside of this is that first it requires MONEY.  So, that is out for most of us.

C)  Insanity- I have tried this one out lately, and it doesn't seem to be working that well.


Another protest about polygamy is that it ends up being really crappy for the wives.  Though I have heard of some awful things going on in creepy polygamist homes, I am sure that this wouldn't happen if some precautions were taken.

First of all, all the wives must never forget something:  WE OUTNUMBER THE DUDE!  I think this clear and obvious power position is often forgotten.

Imagine with me for a moment the benefits this could have on your marriage.....

For one, if you ever need to "take a vote" to decide something, all the women can get together and load the ballot.  Oh yes, what we say goes, because we outnumber the guy.  In addition to this, one of the main things I think I would love is always having somebody to complain about my husband to.  As it stands, everybody loves his guts, is related to him, thinks he is the best chiropractor they have ever met, or something like that.  But I am pretty sure that if there was another wife we could together complain about how he doesn't know we have a dishwasher or about how he never wipes the counter after he shaves.  This would be awesome.

The other problem that people have with polygamy is that they don't want to "share" their man.  I think I understood this sentiment when I was 19 and cared about crap like that, but lately having one guy all to myself just sounds a little antiquated.  I am not saying he can fool around, BUT if it was with a wife, (that I approved of course) and she helped me out, made great enchiladas, and rotated school drop off with me....well, I think I could get over it.

Sad news though ladies.  I talked to the hubbs about this.  In fact, I think the words I used were, "I am pretty sure I could share you with somebody else..."  And he was NOT amused.  Turns out all the decent guys don't actually WANT a bunch of wives.  They realize what a big commitment it is to just have one.  The only guys who want a whole harem are kind of creepy or in a frat and don't really understand what it means to be a good husband and father.

Here is hoping I figure something else out.

And here is hoping my next solution isn't so creepy and illegal.

Disclaimer- (Yes, I often have disclaimers on my posts.  It is because I am offensive.) I WAS KIDDING.  Yes, I am a Mormon.  No Mormon's (AKA The Church of Jesus Christ of Latter Day Saints) don't practice polygamy any more.  And we haven't done this for like over a hundred years.  Yes I realize that there are shows on HBO that say that we do.  If you believe everything you see on HBO then there isn't really much I can do to help you and your worldview.  If you don't think this is funny, then I apologize.  Don't burn my house down.

Unknown said…
I really needed a good laugh! You are freakin hilarious! I am with you on some of those points though!! Blessings~~Nancy P.S. Can't wait to hear the next solution!!
June 7, 2012 at 3:42 PM

Anonymous said…
Um, can I have another husband or two? I'd totally dig that.

Christine said…
LOL! I cannot tell you how many times this has been discussed in positive lite in my house!
June 7, 2012 at 4:05 PM

Cherith Melody said…
What I think you really want is a Mothers Helper :D Or a sibling/niece/nephew to come and give you free help. Pray for help? Find a mediocre balance between attachment parenting and not becoming a slave of your children? (lol yeah I know... is that even possible? :D) As much as I know that this post is a joke I'm also aware of how hard it can be to be a Mum.
June 7, 2012 at 4:05 PM

Heidi said…
Dude, I'd totally love another wife. I have joked about this with my friends endlessly. My next door neighbor is mormon and I tease her mercilessly saying we are sister wives but just live next door and have separate husbands; we just do everything else for each other.
June 7, 2012 at 4:08 PM

Annaleigh said…
I totally get you. And I had a similar set up with my SIL (BEFORE I married her brother), we joked about being the sexless polygamists. I was her wife and she was her hubby's wife. I did her errands...took the kids to school...changed her hubby's tire when he got a flat...got the car towed when it broke down...they watched my kids...took my kids to stuff...kept my kids for a weekend do I could...ahem..."watch movies" with her brother. We went grocery shopping together. She vented about her hubby to me. I annoyed her hubby with her. It's great being close with family. =)
June 7, 2012 at 4:31 PM

A said…
A sister wife could solve all my problems. And I must say, even though I totally don't agree with it, polygamy intrigues me. Just their everyday lives and relationship dynamics!
June 7, 2012 at 6:49 PM

Anonymous said…
hysterical!! favorite part - (Yes, I often have disclaimers on my posts. It is because I am offensive.) heheheheheh
June 7, 2012 at 7:48 PM

Anonymous said…
I have often said to my husband that he is welcome to take another wife as long as I get to vet her beforehand. She needs to cook, clean and not want any children, but love our children. Wouldn't mind sharing him at all if she did all of these things:-)
June 7, 2012 at 8:07 PM

Momma Jorje said…
I promise I'm not overlooking the joke here, but...

I HAD a "sister wife" - only I was married to her, too. We absolutely wound up "managing" the husband. We knew how to get what we wanted. The date night rotation was awesome, though! Each week, two of us would go out on a date. We rotated which two. That means sometimes it was she & I while he stayed home with the kids!

Alas, in the end it didn't work out. But then again, the wife wasn't the problem.

I think most men overlook that 2 wives also means 2 PMS's, etc. There are plenty of pros AND cons, but multiple wives = more work! (relationship-wise)

Mama Birth said…
Totally flabbergasted by these comments! Ya'll crack me up. There are other benefits I thought of but can't mention. The End.
June 7, 2012 at 8:42 PM

Jodiem17 said…
Bwahahaha love it, except the sharing part, but then again, you know when your really tired and all you want to do is sleep, maybe someone could just give him a helping hand for me ! ROFL I also love one of the anonomous comment- what about having another husband ( but not for the bedroom ) That would be great- one could work, one could do house stuff lol
June 7, 2012 at 9:26 PM

Anonymous said…
Too funny, I was just thinking about this the other day! Never would have dreamed of it in the past but now that I'm a mom, I can see some positives in it! lol
June 7, 2012 at 9:49 PM

Tab said…
Oh my gosh, I laughed like a crazy lady. I have suggested another wife to DH on several occasions - its a fab idea. Especially if she happens to love doing laundry - that would be super.
June 7, 2012 at 10:42 PM

Chii said…
Our family is two bi engaged women - we'd love a third/another couple.. What we practice is called polyfidelity. We've dated men together in the past but haven't been terribly fortunate re: outcomes.

We haven't started trying to have children because we'd prefer to have found our other(s) first. Let sigh.
June 8, 2012 at 5:43 AM

Dominique said…
I've always thought a well chosen sister wife would be a welcome addition to my home. And as my sex drive lessons with menopause, to have a little relief, hell yes. My husband, well, he'd love permission to have sex with other women, however, the thought of caring for them and all their expectations and financial load is quite a bit daunting. He's happy to remain monogamous.

Now, communal living, that's a thing I could go for. I dream of sharing a big house with three family wings and a big shared kitchen and family room. Or three homes with a big shared backyard and pool like in Big Love. They'd have to be pretty awesome families, though. My kids would be in heaven.
June 8, 2012 at 7:25 AM

AmandaRuth said…
I couldn't AGREE with you MORE.

but alas, I have the same problem. My husband isn't up for it.

Abby Brooks said…
I've often thought the same thing! People thought I was crazy when I talked about it! I'm new to your blog and I really enjoy your style! Awesome work!
June 8, 2012 at 7:47 PM

mary faybik said…
My sister lived with us for about 6 months- until I had my 2nd baby. She was my right hand, and had she been willing to sleep with my husband, would've been the perfect sister wife. I'm all for it! (and I'm not Mormon!)
June 8, 2012 at 9:23 PM

Mellanie said…
Somehow I missed this one when you first posted it. Hilarious! Love your disclaimer!
June 19, 2012 at 11:49 AM

Inder-ific said…
I had a dream that my husband wanted a second wife, and I woke up feeling all jealous and annoyed with him (you know how a really vivid dream will do this). I told him about the dream, and he said, "That's not your nightmare. That's MY nightmare."