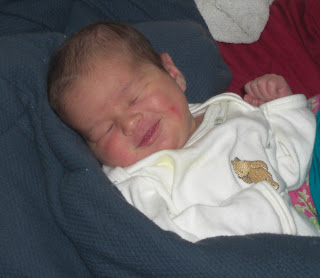 One of the things I love about home birth these days is that it doesn't discriminate.  All kinds of women from all different backgrounds find the faith and the power to birth at home.  Love this story and her detail and devotion.

Enjoy-
As I sit here breastfeeding Charlotte to sleep, I can't help thinking of her birth, and how nice it is to be sitting here feeding her in the room in which she was born.  Once I hit 37 weeks, I was ready for the pregnancy to be over, to be honest.  I was tired of being nauseated, tired of the pelvic pressure, tired of not being able to eat anything other than vegetables and bread.  That being said, I certainly wasn't going to allow for an induction or membrane sweep, since I knew Charlotte would come out when she was good and ready.  I remember being in tears during the afternoon of 25 March because I wasn't in labour.  Not only was I ready to have Charlotte on the outside, I'd wanted an Annunciation baby.  God had other ideas.  Her due date was only 3 days later, on Palm Sunday.  I joke that I have very liturgical children, since Kieran's birthday is often during Advent, and Charlotte was due in Holy Week.

I also joke that family aren't allowed to tell me when to go into labour any more.  With Kieran, my mother told me not to go into labour before the 29th of November, which is when he was born.  My sister told me not to go into labour before the 27th with Charlotte.  Wouldn't you know that I woke up just after midnight on the 27th and realised I was having contractions?  I might not have awakened then except that Kieran crawled into bed next to me.  I got up and took a paracetemol, had a snack, and went to the toilet, and then decided I might as well lie back down since the contractions weren't that strong yet.  I stayed in bed until around 1.30, when it was no longer comfortable.  I told B that I was in labour but that he didn't need to get up yet, and I was probably going to take a shower.

I came downstairs and turned on my computer, because I'd promised Daddy I'd email him when I went into labour.  I also had to text Charlotte's godmother, because she wanted to make sure she had the nuns pray for me during labour.  Because I'm a geek, I also logged on to a message board to let them know.  A lot of them were online, so I ended up sitting on the birthing ball and chatting with them in between contractions.  After about an hour, I was vocalizing through contractions, and one of my friends told me I needed to have B phone the midwife.  I was in denial, but I agreed to it, so I got him out of bed.  He'd come down earlier to set up the cushions and blankets and such for the birth.

So B phoned the hospital so they could phone the on-call midwife.  She rang back and said she'd be over as soon as she could.  She was worried she wouldn't make it in time (obviously she knew I was farther along than I thought I was), so she'd phoned another midwife to come out, too.  Irene got here around 3.00 and checked Charlotte's heart rate in between contractions.  She also rubbed my lower back during contractions, which was quite helpful.  Ann arrived a little after that, so she did make it in time.  It wasn't long after that before I hit transition and screamed.  Unfortunately I woke Kieran, so B went back upstairs to comfort him.  I tried focusing on the Crucifix during these transition contractions, but kept losing my focus and screaming "I can't!", or just screaming, instead.  Irene assured me that I could do it, and I also remembered what I'd read in the Bradley book, that it's almost over when you start saying "I can't".

Transition only lasted for 2 contractions, and suddenly my body was pushing.  I quickly got off the birthing ball and onto my hands and knees on the floor.  I'd lift up to kneeling while pushing, then go back onto all fours in between contractions.  I remember being a little surprised at how long it was taking; since Kieran was an assisted delivery, the pushing stage was only 15 minutes with him.  It was still only 30 minutes or so with Charlotte, so not long really.  She'd start to crown and then go back; once the head was born, Ann saw that that was because of a nuchal hand.  Silly baby.  The body was born in one go at the next contraction, and she was passed under me so I could see her.  She'd been born at 4.10, only 4 hours after I'd noticed contractions (perhaps I'd slept through some earlier, though).  The midwives helped me lie down and Charlotte almost immediately latched on.  Because things had gone so quickly, the midwives hadn't had a chance to look at my birth plan, and so they asked if I wanted the syntometrine for delivery of the placenta.  I declined and asked them not to cut the cord, which they obliged.  They waited until the cord stopped pulsating before cutting it.  It wasn't too much longer before I felt the urge to push again, and the placenta was delivered.  They then made sure I was OK and helped me to the toilet and to get cleaned up before helping me into bed with Charlotte.  I'd only had a very slight tear that didn't require stitches.  I was very thankful for this, as I'm allergic to local anesthesia.  The membranes were ragged, which explains the later infection, but it turned out fine.

Once Charlotte had been born, B brought Kieran down.  He wasn't sure about everything, so he hung back while I went back to sleep.  He wanted to go to Mass, though, so B took him.  Fr David sent the Eucharist back with him, which was wonderful.  Irene came back later in the day to check on Charlotte and me and make sure all was going well with breastfeeding and that there were no signs of infection (there weren't at that point).  All in all, I'd say it was a pretty perfect experience.  The only thing I'd change would be to get in an upright position for delivery of the placenta, since that would have lessened the risk of retained membranes or the like, thus reducing the chance of infection.  I definitely will continue having home births, though

Unknown said…
Thanks for posting my story! It was nice to reread it now that I'm 21 weeks pregnant with the third child and planning another home birth.
June 28, 2012 at 4:04 PM