The Overdue Blues- A Birth Story


The overdue baby- no matter how much you believe in the baby's timing and respect the natural process- waiting past that invented date is just plain hard.  This mom captures it so well-
Enjoy~ 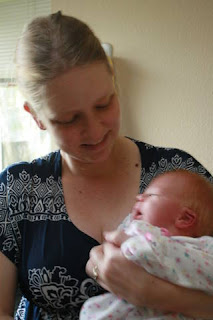 Baby girl and I were deep in negotiation about her birthday the week after her due date came and went. I had chosen to have birth at a free-standing birth center, but could only go through with that plan so long as I didn't go 42 weeks over due. The midwives were already looking at me sideways--despite my prodromal labor of two weeks before, I'd only dilated one centimeter. I was given a suggestion sheet, titled "gentle nudges for the hesitant fetus.  They didn't call it homework. It was homework.

I bounced on my birthing ball did pelvic tilts and careful squats, and basically wore myself out trying to get things started. I sobb3ed in the shower about how I would never ever go into labor. I cried on the phone to my mom too. She prayed with me, my husband hugged me tight, and the week dragged on.

On Friday, April 27th 2012, Boyo (the husband) and I took an easy morning off. We gardened and weeded and I ignored the fact that little girl hadn't yet shown up. I had been doing squats, pelvic tilts, and bouncing on my birthing ball as well as evening primrose oil all week, and I was tired of working hard at it. If she didn't want to come out yet, fine. I'd rip bushes out of my backyard and we'd talk about it when she was older. Probably she'd be grounded. So there.

That afternoon I felt a little twingey, but I resolutely ignored it and insisted we attend out friend's vows renewal. I was contracting throughout the renewal, but I had been contracting since 38 weeks and ignored that too. We talked, received mounds of advice (and told everyone we would not be trying castor oil thank you very much...I'd rather have pitocin than castor oil!) We swing danced all over the floor--something we've enjoyed doing since we got married two years ago (we swung danced--swang danced? Swinged...oh whatever). This surprised quite a few of our friends, who insisted I couldn't be as pregnant as I said I was.

But I was starting to get kind of back achey, and in waves, and my tummy seemed to be constantly tight. I claimed a headache and we went home a bit early. Cuddled up in bed, rode through about three contractions an hour (nothing hard, but definitely present) and watched a few TV shows. We were asleep by 10, as if we both knew that tomorrow would be a pretty big deal.

It was. 6:34am I woke up to a pretty large painy cramp, and walked around my house, called my mom and the midwives. Bounced on my birthing ball, sent out a few updates, and watched Doctor Who (David Tennant) to take my mind off things. By 10 am, I was feeling pretty 'good'-in that I hurt like heck and had to breath through each wave of contraction. I had some back pain. I was still rocking on my ball for the most part. We'd been timing them and they were following 411, so we called the midwife again.

We met at the birth center at 10:30, and Evie took one look at me and told me "you know, if you aren't far, you'll go back home right?" I nodded, and apparently surprised her with how well I was coping--I was 5cm! So happy.

So into the birthing center we went. Another hour of chatting, leaning on Boyo for the worst of it, drinking tea and getting music set up, and always, always bouncing or rolling on that big rubber ball. My mom came at 12:30, and I was just about to step into the birthing bath.

1-3pm was hard hard work. I had originally intended on laboring in the water and pushing on land, as I wasn't sure I wanted to birth in water. But once I got in there was no getting me back out. I squatted in the bath for as long as I could, through each and every contraction. I was making lots of noise--but they were "good" noises--long and low and no swearing. I snapped at my mom once when she was reminded of the scene in Finding Nemo with the whales. Do not talk about whales to a lady in labor in a tub!

Heat was needed for every contraction and then cold for every break--so husband, mom and midwife Evie were kept busy alternating hot rags and cool fans, and I was busy bossing everyone around when I wasn't holding onto my Boyo. He was an AMAZING birth coach. He kept my water bottle full and close beside me, put his hands right where I told them to keep the back pain down and said all the right things. He was with me every step and I could never have completed it without him. Throughout the labor, we Dopplered every 20 minutes and did a cervix check twice--Baby's heart was SO STRONG. She was absolutely fantastic throughout!

3:15 was transition time and that was pretty rough. With every wave I would start off "I can't do this, yes I can but I don't like it it HURTS" and then go back to moaning. I tried to say things like "open" and "out" but that only felt good cause it sounded like "ow" which is how I felt. At one point, someone tried to make me think about flower petals opening and I snapped at them too (I know it wasn't Greg but I dunno who said it) "No flowers, none of that crap. Pelvis opens, cervix opens. Baby comes down!" At each break (only 30 secs between by this time) I would tell myself (in my head) 'Next time, don't start with I can't'. Yeah, that didn't happen.

Started pushing at 3:35 or so. That felt amazing--more ouch, but more than ouch, baby was coming--I could feel her!! I was so excited and pumped, and just kept right on pushing away--too fast, unfortunately. OUCH.

Baby came out purple and squalling, with bright blonde hair all over her head. She took about 45 minutes just looking around the room, spent some of that time in dad's arms while I birthed the placenta (seriously, piece of cake), and got fundal massaged (ow. ow. humph.) Then we did a bit of breastfeeding while the midwives checked me over.

Here's the unfortunate bit. because I pushed her so quick, something snagged me on the way out, and I got a pretty gnarly set of tears--one on my perineum and one on the inside of my lady bits. We had to go to the hospital about two hours after Brielle was born, since the midwife wasn't comfortable stitching the perineal tear without a better look. So we packed the baby and I into the car and went to the hospital. Thankfully, they could do everything out patient, and stitched me up. Again, Greg was amazing through this--I know he was shell-shocked, but he held my hand and helped me position the baby for breastfeedings, effectively distracting me from my consuming need to kick the jerkface doctor in the face (she wasn't really, but that numbing stuff DID NOT WORK. Ouch. OUCH. grr.)

Mom was awesome through this too, holding baby girl, taking pictures, talking to me and getting me whatever I needed, including pizza. Omnomnom, I was starving. Evie also stayed with us all the way to the hospital, wheeled me around and sweet talked the nurses. Then she came with us to our house and saw me settled in, and made sure that breastfeeding had a good start at being established.

Brielle was born in April, according to our agreement. April 28th, 7lbs 11 oz.

Over all a fantastic journey and completely worth the "I'm overdue!" blues.

Jeanna said…
So funny, thanks for sharing! I particularly related to the thing about not being a flower. I remember reading a book in which the image was "you are a ripe pomegranate ready to burst." Seriously? Um, no. I am a seriously pregnant woman who wants to be done with labor, no matter how awesome it is, blah blah blah. I sure as heck ain't a pomegranate. Or, for that matter, a whale (ACH!). Oh, well. I guess the flowers and fruit thing works great for some people. :)
May 23, 2012 at 9:58 AM