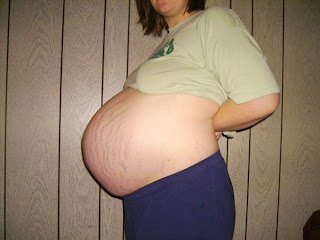 It never ceases to amaze me how different each woman experiences labor.  This mother had a quick and painless birth of her fifth child.  This is truly an awesome story!

Plus I know it can be OVERWHELMING when you are in the middle of mothering a bunch of little ones.  This story (with her last three babies in the span of about two years) gives hope to you moms in the trenches!
Enjoy!

In March 2009 I found myself unexpectedly pregnant with my fifth baby. At the time, I had a 7 year old, 4 year old, 20 month old, and a 6 month old! I was shocked and scared, but started making plans.

I had my first four in the hospital with varying degrees of intervention. I decided my fifth baby should be born at home, and immediately found my midwife, who helped me choose an EDD of October 21. (I was nursing and had not yet resumed my periods, so we didn't know when the baby should be here.)

Fast forward to October of 2009. Contractions every night but no active labor in sight. I was huge, exhausted, and uncomfortable. I spent my days running after my kids, the youngest two had just turned one and two years old. We had also just moved into a bigger home. I was depressed, thinking my baby would never, ever, EVER be born. Finally I asked my midwife to check if I had any progress. On October 26th, I was 7cm dilated with waters bulging but still not actively laboring!

The morning of October 27th, I woke up and everything was different. The sun was shining after weeks of clouds and rain. The autumn colors were spectacular. It was a really good day to be alive. I laid in bed and looked at the trees outside and was just .... happy.

I stood up and felt the weirdest sensation ever. The baby had engaged, something my first four had never done. At that moment, I knew, just KNEW, that I would have a baby today.

I got the kids dressed and we went to the fabric store to get material to make the baby a hat. Then we puttered around the house the rest of the day. My grandma called around 7:30pm and told me her birth stories. I remember saying "There's no way I'm having a baby today." But I still knew the baby was coming.

Contractions started around 8:30pm. They were spaced out; anywhere from 8-25 minutes apart. They were strong but not painful. I got out of bed and walked around and then got in the bathtub. My husband called the midwife and doula around 9:15pm. Contractions were still strong and getting closer, but sporadic. I timed them and found they were coming every 2-8 minutes. I could feel the head pressing on my perineum, but no urge to push. So I got out of the tub and back into the bedroom.

The midwife arrived around 10:00pm. I was on my bed, butt in the air, feeling my baby slide down and trying to keep it in. The midwife's hands were so cool and soft as she touched my back to let me know she was there. The doula was still a good 40 minutes away. My midwife asked if I'd like to be checked and I said yes. She checked me, and that was the only painful part, laying on my back. I was 10cm and waters bulging. Suddenly, as she withdrew her hand, my water BURST everywhere, a huge splash. At that moment I had to use the bathroom. I mean, I HAD TO GO NOW. I leaped out of bed, as fast as a fully dilated pregnant woman can, and literally ran down the stairs. My midwife chased me with her hands full of supplies, and i remember her saying "Where are you going??"

I got to the bathroom and sat on the toilet. By this time it's 10:20pm. My mom was suddenly there, poking her head in the bathroom. Where did she come from? My husband must have called her.

I sat on the toilet, and the midwife sat cross-legged on the floor in front of me. I kept rubbing my thighs really hard and I was shaking. Still no pain, just a very intense feeling. My body started to push involuntarily. It felt like throwing up in reverse. Every few moments (seconds? Minutes? Hours?) my body would wretch. Suddenly it was different again and I was streeeetching, like I would burst... and then POP the head was out. My midwife unwrapped the cord from around his neck and said "Stand up!" so I did, and out slithered a roly poly newborn with hardly any hair! She checked the time and it was 10:28pm.

I sat down on the toilet and took my baby in my arms. I called my older kids in so they could check the gender ... IT'S A BOY!

We went up to the bedroom and took vitals. My mom kept saying "He's so big, he's so big!" and the midwife agreed, but I thought he was little. I guessed around 8 pounds but the older women were right - he weighed in at 10lb 6oz and 20" long. I had no tearing, just a little bruising. I delivered the placenta onto a chux pad on the bed, and it felt so weird after that huge baby!

We settled into bed and I nursed my beautiful chubby baby boy for the first time. Then my husband took all the older kids to bed and I fell asleep with my amazing new little one. Meanwhile, my doula called to see if I needed her ... nope! He was here already! (I am still the only birth she has ever missed!) 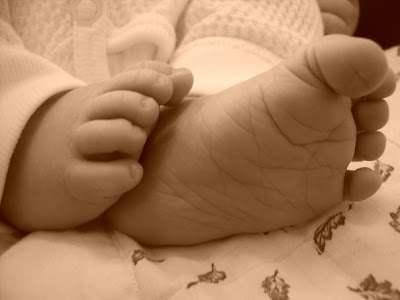