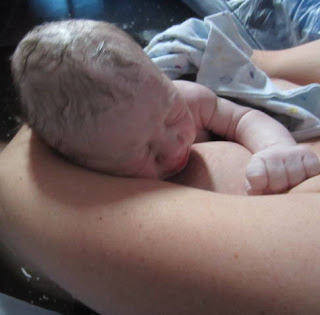 What a fabulous birth story.  It shows how healthy and amazing a birth can be when we allow the natural process to unfold even when the birth is different than the norm.  What an blessed mother and baby.   Our bodies are capable of knowing what to do and healing themselves!  This birth could have been very different.

Aiden was born on Friday, March 30th at 9:45 a.m., at 40 weeks 4 days, but his birth story starts at 37 weeks when I had my first contractions. Having had Braxton hicks contractions forever (since 20 weeks or so), I knew these were a little different, they were very uncomfortable but not necessarily “painful”, but the cramping sensation was very different than BH’s.

Our midwives let me know that it could mean he’d be earlier than 40 weeks, OR it could mean nothing, and that some people just have contractions before they go into labor. The real contractions often caused BH contractions, and they were random in timing and never had any progression so I readied myself for him to be late, what I’d been expecting all along. I thought for sure I’d have two April Aries boys, with Mark being my first April Aries boy.

Friday, March 16, at 38 weeks 4 days I went to the bathroom and had a strange “I’m leaking?!” moment where I thought I’d finished peeing but there was still liquid trickling out. I was in the bathroom trying to figure out what was going on long enough that Mark came to check on me. After only a few trickles and no gush we decided I must have been peeing and I went back to bed.

At 2:45 a.m. I got up to pee and again had the same strange sensation, and this time smelled the liquid and it definitely didn’t smell like pee… So we called our midwife who said it was probably a small leak and to go get as much rest as we could because I’d probably go into labor within 24 hours. Long story short, we spent the next day awaiting a labor that was still two weeks away. Sunday a more high-tech test (more high tech than the litmus paper used on Saturday to confirm it was amniotic fluid) at the midwifery center verified that I’d probably had a small tear that repaired itself and we were back to status quo.

I had my last day at work on Tuesday the 27th and spent Wednesday doing a bunch of projects around the house, as well as going on lots of walks. Toward the end of the day on Wednesday I started to feel like he might never be born, and between a growing anxiety that he’d be really late and my incredible physical discomfort I was not in high spirits. But Thursday I woke up with a fresh outlook, and started to make to-do lists of things I wanted to get done as well as scheduling date nights for the weekend to go to a few of my favorite restaurants.

Between cleaning the bathroom, vacuuming and miscellaneous other household projects I noticed that my contractions seemed to be a bit more regular than usual and I timed a few of them at 10 minutes apart. While still being fairly certain that it didn’t mean anything, I decided to head to the gym to go for a walk on the treadmill, since a “Pineapple Express” was rolling through the Northwest and it was pouring out. I texted Mark to tell him that I was having a lot of contractions and going to walk, and headed off. I only lasted 20 minutes on the treadmill before I felt like I was having one constant Braxton Hicks contraction, and decided to head home via the grocery store where I stockpiled a bunch of my favorite foods and staples for the weekend (since I was still banking on him being an April baby…)

The rest of the afternoon was uneventful. I continued to have contractions about 10 minutes apart and continued to tell myself not to time them because it didn’t matter. By the evening I admitted, to myself and Mark, that I was feeling “a little weird”, but we proceeded with plans to have a friend cook us dinner. We finished with chocolate cake around and headed to bed around 10.

At 12:45a.m. on Friday the 30th I awoke to a giant kick from Baby, and felt my water starting to head down—I said very calmly to Mark “my water’s breaking” and hopped out of bed to grab a towel just in time to get it on the floor under me. It was not a flood of water but was significant enough in size that there was absolutely no doubt that my water had just broken “for real”.

After relaying the news to K, our main midwife, we got back in bed to try and rest. Just as soon as we did that I felt Baby wiggle his head and then a flood of water came pouring out—this time I was not so calm, since Mark wasn’t jumping out of bed and grabbing towels I said “there’s TONS of water!!” and that snapped him into action. Once that was cleaned up, we got back in bed and turned on Bon Iver and I’m not sure if Mark actually fell asleep, but I tried to rest between contractions that had immediately gone to 6-7 minutes apart once my water broke and much stronger .

At 2:30 a.m. I declared sleeping a lost cause and was too uncomfortable to be in bed any longer. Mark got up and started readying things like the birthing tub and I turned on music and lit candles and tried to get in the zone in the living room, laboring mostly on the couch at this point with contractions that were 4 minutes apart and seemingly intensifying with every one. At 4a.m. I called our midwife, K, back and said “I know you said to call in the morning but what if my contractions are 4 minutes apart” and she said “call me if they are 4 minutes apart for an hour” to which I said “they have been for half an hour” and she said “call me back in 1/2 an hour if they stay there”.

This was a turning point for me mentally because in my gut I knew it wasn’t going to be the next night when I had this baby—and I wanted someone to come be with us. BUT, in my rational brain (which was still working at this point) I knew I was a first time mom and I’d only been in active labor for 3 hours and she was probably right, I should relax and they’d come by in the morning. I went back to laboring with Mark and tried to relax…

But at 4:20a.m., after a couple back to back contractions, I called her and said “ok they are still 4 minutes apart” and she must have gathered from my tone of voice that I was needing someone to come support us. She said C., her apprentice, would be over soon. Mark was a tremendous source of support throughout my labor, and I was simultaneously really glad we had a chance to work through the first couple hours on our own, as a team, and really glad that we were moving into the next phase where we’d have the support of our midwives too.

C. arrived a little before 6a.m. and Mark told her my last contractions had been 5 minutes apart, which I knew was not right, there was no way I was getting any more than two and a half minutes of down time. So I quickly said “No they’re not!!” and went back to leaning over the exercise ball and waiting for them to time them again. C. said “they aren’t that far apart” what seemed like very shortly after that and then things snapped into action.

I was getting further and further away from reality but have hazy memories of her texting our main midwife, and her and Mark taking turns applying pressure to my back through my contractions. I was still mostly laboring on the couch on all fours or leaned up against the wall, and contractions were probably 3 minutes apart and STRONG. I don’t remember much around this, but I knew I was going to throw up and that I didn’t want to do that in the dining room—there was still a rational part of my brain working briefly and I convinced them to move the bucket to the kitchen just in time. That then made me want a shower, even though I hadn’t thrown up on myself I wanted to feel clean before I got in the birth tub I guess.

But so began the ‘Bathroom phase’ of my labor—which is a blurry, and not as positive phase—the water in the shower wasn’t warm enough, and felt terrible touching me, the bathtub was cold and hard and didn’t allow Mark to give me the counter pressure I needed. At some point in here (7:45 a.m. from what they tell me) our other midwives arrived and I have a hazy memory of A., the third person on our team coming into the bathroom and telling me I was doing a good job, and then K. coming in and suggesting that they check me.

Knowing that 1) I would have to lay down for that and 2) if they told me I was only 4cm I would have DIED, in my head I entered the “I don’t know if I can do this phase”. I told them I couldn’t lay down to be checked and somehow I became convinced that if I left the bathroom they’d want to check me so I kept saying no to moving into the birth tub too. And kept asking Mark to make sure it wasn’t too early to get in the tub.

Somehow they talked me into getting in the tub, and I was SO happy once I was in the warm water; it was just what I needed. In hindsight, I know I hit transition in the bathroom. Once I was in the tub it was clear to me that my baby was on his way out and we just needed to work together to make that happen.

I was laboring leaning against the side of the tub, holding both of Marks hands through the contractions (it’s a miracle I didn’t break his fingers!) for the hour of pushing before we met our baby. I know that K. was talking me through the time in the tub, but I was in “laborland” and only recall her telling me to reach down and feel Baby’s head as he started to crown, and I didn’t feel like I could change positions long enough to do that, but after she had Mark look and suggested it again, I finally reached down and felt this velvety, pointy little head and it was just the inspiration I needed to get through the rest of the pushing.

That and as they monitored his heart tones they were moving the Doppler down with each contraction—so I could tell I was making progress, since his heart was moving down. I don’t know how long it was between feeling his head and his entrance into the world, but I remember K. telling me what to do when he emerged and the next thing I knew he was gasping and blinking in my arms, and Mark was right there with us. He was absolutely perfect.

It’s been five days since he made us a family of three, and I have spent all day every day in bed with him, marveling at him and the entire process of pregnancy and giving birth.