Welfare- Truth Is, I Hated It 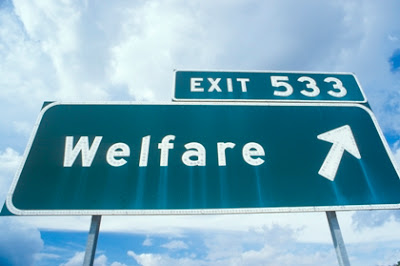 I have seen a few mom blog posts touching on "welfare" or "WIC" or things like that lately.  Honestly, I haven't had the time to read all of them, but it did get me thinking back to when.......

When my hubby was in grad school we had one baby when he started.  We wanted me to stay at home with the babe and when we moved states we lost our health insurance and our cheap rent.  So, because "everybody else was doing it" I went and signed up for help.  My son received medicaid and our family got food stamps.

You know, people complain about the programs, the food isn't healthy, the food is too generous, the health care is limited, people get too much, people don't get enough, the slackers, the workers, blah, blah, blah.

This isn't a very intellectual response but my thoughts on social "welfare" (if that is what you want to call it) are simply that I hated it for ME.

I hated sitting in the office.  I hated that it destroyed any sense of pride.  I hated feeling like I was begging for money.  I hated the way I FELT when I went to the grocery store and used that card instead of money we had earned.  I hated the way it impacted our relationship with money.

Truthfully, I felt like it was bad for the soul.

And I just couldn't get over it.  I never felt good about getting welfare.  I guess you can justify it by saying it is "temporary" or "needed" or that we will "pay back into it,"  but none of those really jived with me.

Later on, we moved again.  We decided NOT to sign up for food stamps and health insurance this time.  It bothered both of us, my husband and I, to receive those benefits when we felt we hadn't earned them.  And let's be real-  When you are on social welfare programs, many people inevitably start to...bite the hand that feeds them, so to speak.  I know I noticed myself doing that after a while.  And frankly, that is what bothered me most of all, the change I saw in myself.

I don't care if I DO pay taxes, I don't think that entitles me to an unlimited government bankroll for as long as I need it.  And I hated to see in myself a growing sense of entitlement.

You know what- it royally SUCKED being poor and not having government help.  But some amazing things happened.  Our families helped us.  (Yes, another blow to my pride.)  We were more careful with money, because if we spent it poorly, there was literally NO FOOD.  We ate cheap, we gleaned, I learned how to make things that I had never made before, we used our garden, we were GRATEFUL for every bit of food we had and we wasted less.  I realized how the word "need" is really ABUSED in our country right now.

People think their 9 year olds need cell phones and their houses need TV's.  Nice to have, need....not so much.

I had two babies without health insurance, paying with cash or trade to a home birth midwife, rather than getting "free" care at my local hospital.

And we were....dare I say it?....blessed.  It will sound lame to some, but I did feel like we were blessed for our efforts to try to make it.  It was extremely motivating to make money, and it was even more satisfying to start to get to a place where we were making some.

Was is stressful?  It was probably the most difficult year or two in my short life.  But we made it through- barely- but we did.  And I guess that was my thought on it all-  Unless we really NEEDED those programs, I would prefer they were used by people who did need them.

That, I felt OK with.

(This isn't a cap or a judgment on people who get government aid- just my thoughts on ME getting it.  But if you need to tell me how insulting I am, I would love to hear about it.  You can e-mail me at thisisabogusemail@mamabirth.com)

mamamia said…
I understand completely and agree with your thoughts on welfare and making do with what we have when things are tough.
It's something I have had bursts of learning to do.
It's a bit like giving birth, we never know how much we can do until we're made to.
March 7, 2012 at 12:34 AM

Jodiem17 said…
my mum was a sibgle mum with four kids but worked her butt off and survived on very little, yes at times we had some help from the government ( which is great to have when you have nothing else,) but i think the pride issue is important, she taught me that i can always make myself better and get out of a bad situation. Great post
March 7, 2012 at 1:22 AM

Unknown said…
I can somewhat relate. My kids have Medicaid, and now I do, too, thanks to an ER visit with no insurance andno money. I hate that I have to do that.

When my kids were born, we lived in England. Being foreigners, we did t qualify for child benefit or assistance or whatever. I made things, I learnt to utilize ever last bit of things, and we made it. It did, of course, help to have the NHS, which I miss.
March 7, 2012 at 3:38 AM

Tamara said…
Thank you for this post! I'm currently struggling with the decision of whether or not to accept help from WIC and medicaid. I just don't feel good about it. We could use the financial help, but I'm feeling a bit like a loser - like this will start to define me in a negative way somehow. I'm glad I'm not the only one to not want to do it. I thought I was nuts for letting my pride interfere with getting some help, but sometimes our pride is all we have! Love your blog.
March 7, 2012 at 4:05 AM

ellie said…
First of all, I totally loved this post and identify with it completely. My husband is a full time student and works as much as he can (work is pretty hard to find.) We are on assistance on and off as we need it because it is our priority that I stay home with my children. As much as I hate it and hate the hoops and hate all the waste that I see in this pathetically flawed system, I DO NOT feel guilty about it. My family is an investment. We have both worked and paid taxes since we were 16. I didn't stop working until I gave birth to our first child. With my husband's education completed we will pay more into the system than we ever got out, and our children won't find themselves in the postion that we did of not being able to afford an education. I have NO problem with anything you said in your post - I agree - it just SUCKS all the way around. BUT ... when I read all the comments on Facebook, it made me want to cry. Of course I feel embarassed when I hand over that EBT card or back up the line with one or two WIC coupons, but I try to tell myself I have nothing to feel guilty about! If anyone judges me, THEY are in the wrong. My husband works harder than ANY man I have EVER known, and do I really think it would be better to put my 3 children in daycare in order to bring home a paycheck that probably wouldn't even cover the daycare bill??? Reading all the comments from women who I assume are "like-minded moms" in so many other ways reaffirmed that little voice inside me that makes me cringe and confirms that, Yes, people are judging you. They think you're skating along on a free ride and that somehow you're "stealing" from them. What was that post about Beyonce a while back ... "All the judgey ladies"?
March 7, 2012 at 7:51 AM

Mama Birth said…
I hope it is clear that I am not trying to be judgy of people who use this- need or NOT- I am glad those programs exist. We used them. We may again. I just didn't like the way it made ME feel.
March 7, 2012 at 8:13 AM

magreen said…
Ellie - i am so with you! In the first year my husband attended medical school - we went through all our savings and myself and 2 children at the time - 1 a newborn - went without health insurance. The plan was that I would work eventually, but we never imagined the ever changing and demanding schedule of a medical student. receiving healthcare, food stamps, and most recently WIC (b/c there wasn't enough $$ to feed us a clean whole diet)is extremely humbling. I was embarrassed at first. We only applied for healthcare, but the EBT card was sent to us too. I still garden, we live without and on hand me downs, Christmas gifts are hand made and food is made from scratch. I had to let go of my pride and remind myself that "We qualify". I felt guilty that I was home with my kids and my husband spent 80 hours a week learning and remind myself again and again "We qualify". These programs are to help people in time of need with the goal of them bettering their life and thus society. There should be no shame in that. 2 months from graduation we just completed the 'renewal" step and celebrated that it would be the last time we ever submitted this paperwork. In a few short years when residency is over - Our first year of taxes should more than cover everything that was given to us.That is incredible! and I feel that we are an example of the program working exactly as it should. B/c we had the support of our neighbors - to feed our family through the most challenging years of our life - we will give back so much more - both in taxes and services. Human nature is to be self sufficient and of course we feel humbled (or embarrassed)when other people provide for us, but really - it is an example of good society and no one should feel shame. It should motivate one to evaluate their needs and if a shift in lifestyle means they can "get by" - than bravo for not taking "advantage" of the system. What a great post to encourage that recognition and important life lesson.
March 7, 2012 at 11:38 AM

Linda Peterson said…
My husband and I have been living the poor student life our whole marriage. I'm pregnant with baby #2. We've gotten assistance in two different states now. I have been really frustrated with WIC for a long time because I did completely feel that loss of autonomy and dignity. I finally stopped using it altogether, because we got SNAP. I am really grateful for the SNAP case worker that I interacted with. He was very kind and respectful and easy to talk to. When he saw the pathetically small student loan budget that our family was supposed to survive on, he expressed shock. I felt so vindicated, like "Yes, it IS an impossibly small amount of money! I'm not crazy for getting assistance!" For us, the only options right now are government assistance or me working while my husband's in law school and leaving our children in daycare. Raising my own children is my highest priority, and I will take whatever help I need from the government to accomplish that.
March 9, 2012 at 12:24 PM