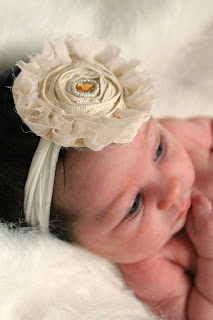 
On December 3rd , 2011, a beautiful sunny Saturday, I woke up at 9:15am  to a painfully full bladder that I had emptied only 3 hours earlier, extreme low back pain from SPD, and gas pains. I personally never need to go number two first thing in the morning, so that was strange. I got up and got my son up and sat with him & our 4 year old daughter in their play room and we just hung out and had breakfast, like any other morning. I kept having these ‘gas’ pains and decided to time them. As I timed them, we listened to Coldplay “Paradise” and some other soothing music. They were rather close together. About 5 minutes.


I called my Husband and told him I was pretty sure I was in labor. He was on the way home but was about an hour away. I just needed him. I felt overwhelmed having to care for my other two children alone. The pain wasn’t too intense, but I knew I needed his support.
I was so relieved when he came home right around 11am. We cleaned the house and I took a nice bath and did my makeup. I knew this was it, we were having a baby today! Me and my Husband we along and picked up Olive Garden To Go for a nice lunch and stopped by Babies R Us because I felt as though we needed more blankets for her.
The gas pains [that’s the only way I can describe them] started becoming more intense and strong on the drive home. I started vocalizing through them. Clay blew the pool up and started filling it with hot water. At right before 3 in the afternoon, I went to the restroom and my lower belly and vagina was feeling really tender. I had a couple loose bowl movements and that confirmed what we already knew, my body was prepping and cleansing itself! I wiped my vagina and had some pink-tinged mucus.
I felt something coming out and wiped again and lost my mucus plug and had my bloody show! Game on!!! I’m not sure, but I’m guessing I was about 5 centimeters at that point. I called my Midwife, Brenda and told her about having my bloody show. She said it sounded promising and to keep her updated with the timing of my contractions and to let her know when they got to be 5 minutes apart and were lasting 40-60 seconds each. Mine were very sporadic, some being 4 minutes apart and some being 8 minutes apart.
I started really hurting and having to loudly say “Ohhhhhhh!” through them. We figured it was time Brenda head our way since she was an hours drive. I got on my ball while Clay continued filling the birth pool. I bounced and it felt good. I had one contraction that got me off of my ball and brought me to my knees at the end of our bed. I started crying because I was afraid. I kept going to the restroom to empty my bladder to keep comfortable.
As I was coming out one time, I saw my Midwife round the corner of our kitchen and I felt so relieved! She got to our home at around 10 minutes before 5. She brought in all of her supplies with Clays help and as she was setting up I sat back on my ball. She knelt down and got on my level and showed me the proper way to breathe through a really tough contraction. 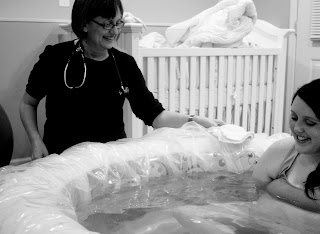 We decided I needed to be checked and my guess, along with hers was that I would only be at about 4-5cm. She started checking me and said “Oh! Goodness, you are…..about…an eight!”. My first thought was “NO WAY!”. I thought maybe she was just trying to make me feel better. The Midwife’s assistant came shortly after! I got really excited and decided I needed to let my Mother and Sister know she would be here very soon.
I couldn’t believe I was in transition. I felt fine. Only a few really intense waves. After I called my Sister, I was in our kitchen, alone and thought to myself, I can’t get out of this now. I’m stuck here and just have to do it. It scared me a little, but I knew I had gotten so far without medication and I had already shown myself how strong I was. 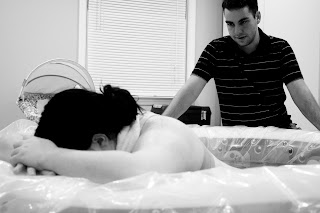 I came back into our bedroom and got back on my ball. We decided the water was at a level and temperature I could get into. I was kind of hesitant, because I was feeling really modest and didn’t want to take my clothes off, but as I stood there looking at the pool a wave started coming over me and I took my pants and shirt off and just got in. OH man, it felt great!!! I left my sports bra on, which made me feel better and covered. 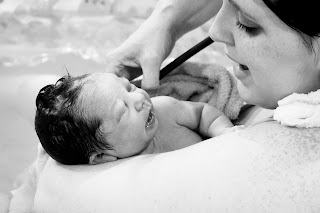 I just remember looking at my feet under water and playing with the liner with my toes. We all talked and chatted between contractions and I told her about my fear of pushing. She was so great a reassuring me that everything would be fine and it only lasted a very short time.  I sat in the bottom of the pool during about three or four contractions but I started feeling her move down and sitting flat on my bottom was very uncomfortable. I had one contraction that felt like it was all in my bottom. I decided to get on my knees and lean over the side of the pool. I remember frequently saying I can’t do this.
My Midwife would say “You already are”. Which was so nice to hear. I WAS doing it! Getting on my knees must have opened me up and allowed her to move down even more because the intensity of the contractions picked up imensely! My mother came in around this time and I had to get her to be quiet. All I wanted was silence. I held onto my Husbands hand and it made me feel like he was helping me. He would look me in the eye and that was all the reassurance I needed.
It was quite stuffy in the pool and we put a cold rag on the back of my neck, which Clay and my Mother would keep re-wetting for me. I also had one to use for my face, but ended up burying my face into during each contraction which felt great. I asked Clay to pull out my little red fan and set it up so it would blow on me. That felt great too. Brenda told me to listen to my body and push when my body said to push. That urge snuck up on me so quickly! 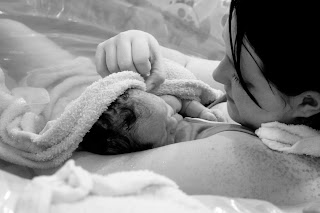 I was shocked at how my body started pushing on its own! I started helping it, but I was scared of the pain. It felt good to bear down, but I was really just testing myself and practicing. I could feel her in my birth canal and knew I’d have to help if I wanted this to be over anytime soon. So with the next urge, I pushed with everything I had until I felt burning. The noises I was making frightened me. Kind of a gasping noise.
I felt her go back up and my Midwife said if I just kept at it, we might have a head, next contraction. Brenda held me down there to keep me from tearing and it hurt because of all the other pressure I was feeling.  With the next wave, I couldn’t control it. I helped my body and pushed so hard, yelling, and feeling her come out. I felt the stretching and as soon as I knew it, Brenda said “We have a head!” I guess my body just kept pushing and so did I, but her shoulders and body just slipped right out and I could feel her between my legs under water. Faith loved seeing her baby sister swimming!
Brenda unwrapped the cord from around her body and I reached down and picked up my baby! She was so tiny and purple. I immediately noticed her dark, long, thick hair! She was so beautiful and I was just in shock that it was over and my sweet baby was here! I sat back against the pool and put her on my chest and we covered her with a towel. She wasn’t turning pink fast enough s o Brenda gave her a rub down and got her going. I put her to my breast and she started nursing. I was cramping and just wanted to get out of the tub, but needed to deliver the placenta. 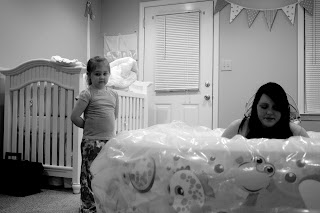 We kept her attached to her cord for about 15 minutes before I was just ready to deliver my placenta and get out. I watched them clamp and my husband cut the cord right in front of me. There was barely any blood in her cord which made me so happy, my baby got all of that good blood! I needed to work to get the placenta out, so Clay took Anniston.
She gave me an herb under my tounge to help expel it faster. I think it was called placenta ease or something of that nature. It tasted awful so I sipped some coconut water after I swallowed it. We tried to push and it felt like it was coming out so Brenda held the cord just to give some traction and to help me. It came out fairly easily, and I’ll never forget her telling me it would be easier because it didn’t have bones. That made me laugh.
I got out slowly and wrapped myself in a towel and went and showered quickly. I stared at my baby the whole time I was waiting for the placenta to come. The shower felt amazing and I washed my hair and leaned over and let the warm water run over my bottom and it was really soothing. Once I was out I wanted my baby. I went and sat in our bed and nursed her and brushed my hair. She was the most beautiful baby. So pink and alert and happy! I was so deeply in love! 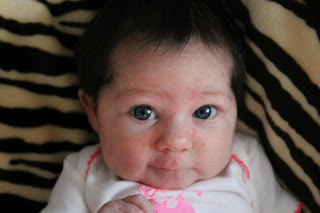 The rest is a blur. I got examined and had no tears! Only broken skin, which was great! Anniston did great during her newborn exam and was so wide-eyed! My midwife stayed with us for about 4 hours, talking and going over details. I enjoyed having her company. She made me feel so secure. Clay was in awe of what happened and how fast she came! We sat in bed together for a moment and kissed and just looked at her together. It was perfect.
They packed up and left with the promise of a postpartum visit a couple days later. I was told my baby was perfect and how great I did! I was one proud momma! We spent the rest of the night snuggling, eating and enjoying our new precious little baby. Anniston Claire was born at 6:30, weighing 7 pounds 14 ounces and was 21 inches long. She had beautiful long black hair and was very alert and had big, wide open eyes!