I absolutely LOVE that this mom has a great birth even with a compound presentation- so often we see that as a reason for a surgical birth.  But one of the things that really stuck out to me in this story is that mom goes in, gets checked, isn't that far along, and decides to go home- LOVE that.  There is zero shame in going home to rest, regroup, and come back later.  Look what a great birth that choice helped this mom get-

Cole's Birth Day (or the day of his birth)

My back contractions started on a Tuesday. I was really excited but I didn't want to get anyone's hopes up, lest they stop and it all be a false alarm (so I didn't post anything about it on my pregnancy blog.) They slowed down at night but got back up again in the morning on Wednesday. Keith and I went for a walk and sure enough they became stronger, but not regular by any means. That night, Peter and Peg came to hang out with us and share some laughs.
I had lots of contractions while they were there, but nothing too severe that I couldn't focus. Later after they left, things started to speed up and my contractions began to be closer together. I tried timing them but realized they were not yet regular. But I wanted to pay close attention to them because I really started to believe I was in early labor. That meant, I didn't want to sleep.
So I called my doula, Johanna, and told her the news. She said if I could sleep through the contractions I really should. Because who knew when I would go into active labor. I agreed and was able to sleep about 3-4 hours. Thank God I did! The next morning I woke up around 4:30 and began to track my contractions again. They began to be regular and closer together.
By the time Johanna came my contractions were more than a minute long and about 3-4 minutes apart.  Also, my mucous plug come out and the contractions were getting stronger. I began to shake and because of that I suspected I was in transition (which would have meant I was close to 7 or 8 cm). 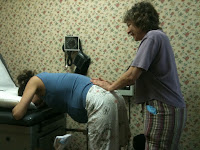 We called the doctor's office and headed there since the birth center was packed. On the way I got really emotional because I started to realize how close i was to meeting my baby. It was a good thing too, because to my HUGE disappointment I was barely 2 cm.
Not only that but the triage nurse gave me more bad news (which I think was totally wrong about)  - that I was only 75% effaced and my cervix was posterior. This would have meant that my cervix regressed in two days, which I highly doubted. I cried because just when I thought things were opening up, they were barely moving. We decided to leave the doctor's office, get something to eat and go home. 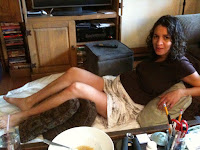 I labored at home for the rest of the morning and afternoon, resting on the couch, breathing through the contractions, and eventually taking a nap. Around 4 p.m. I ate something and then took a shower. When I got out of the shower, everything changed. I began having regular, strong contractions.
Johanna came back over around 6:30 p.m. and by that point I had been using my relaxation techniques so that I was able to breathe through the pain. Keith was a great coach too because he pushed me to breathe through the contractions and every time he noticed the contractions spacing apart he'd make me get up and change positions, which always brought things back to normal.
I had a little bit of dinner around 5 p.m. but by 8 p.m. I was starving. I begged Keith to send Johanna out to get my chicken fried rice because I didn't want him to leave me, but I was so famished and that is what I was craving. Luckily, she didn't leave right away. Just before she was going to leave I had a tremendous contraction that ended up breaking my water.
I remember thinking that the baby had moved and then suddenly I realized there was something leaking out of me. "I'm leaking!" I shouted. "Your water broke!" she responded. So it was the water bursting inside of me that I felt and not the baby's movement. That's when the contractions started to get much stronger and more intense and closer together. That's when Johanna said "Forget the chicken fried rice - we've got to get to the birth center."

Off we went at about 70 mph. I breathed through the contractions on the way there, laying across the back seat with a towel and two pillows. Keith called the emergency line and talked briefly to Margi, the midwife who had examined me on Tuesday, before we lost the signal. I was excited that she was on call. Once we got to the birth center and I got out of the CRV, my contractions had gotten much stronger and were probably about 2 minutes apart.
Needless to say, I was in so much pain that I didn't care that I walked barefoot into the birth center at around 9 p.m. "Barefoot and pregnant," Johanna joked.  As soon as we got a labor room (which was pretty much right away) I requested the use of the birthing tub. I didn't want to give birth in it, but I did want the pain relief the hot water would provide. Unfortunately, I had to be monitored for 20 minutes before I could do anything.
Before monitoring me an older nurse (who I recognized from my pre-term labor experience there) checked my cervix. With her hand still inside my vagina she said excitedly "Awesome!" And Johanna said, "How awesome?" To which the nurse responded, "7 centimeters." I smiled despite the pain. I was almost there! There was no turning back and very little chance of any intervention now. Somehow I made it through the next 20 minutes without wringing the younger nurse's neck who insisted I be monitored. I know it's part of her job, and she did let me lie on my side, but it was killing me to lie there!

After that I began to progress pretty quickly and we soon realized that I was beyond the birthing tub.  Instead I went into the shower and as soon as that hot water hit my back the urge to push took over as did the pain. Everything after that was a blur. I remember arguing with everyone that I knew it was time to push and they shouldn't stop me. I remember being checked a second (8cm) and third time (almost fully dilated), and I remember begging Margi to let me push and her responding with "Breathe the baby down."
Keith told me later that when Margi first arrived she kissed me on the forehead and sat with me, helping me to calm down. I remember none of that. I remember being able to breathe down the baby a bit, but only when I wasn't busy being petrified of the pain that I felt or knew I would feel once I started pushing. I also remember doubting myself completely. I remember thinking and saying "How did I think I could do this naturally?" But I did do it. I did.

Finally, Margi gave me the go-ahead to push and I remember being afraid I'd poop too. Because this is what it feels like to push: it feels like you have to push, vomit, and poop all at the same time. It's like I was going inside out - the strangest feeling.  During the pushing I was trying hard to breathe abdominally so that Cole got enough oxygen, but I must not have been doing a good enough job because I was hyperventilating and they had to give me oxygen and move me to my left side once his heart rate dipped a little bit.
That was when he was headed down the birth canal. Then I remember Margi telling me that I had to push as hard as I could to get the baby's head out or else she'd need to do an episiotomy because of his dipping heart rate. Of course, she knew that in my birth plan I did not want one, so with all of my might I pushed his little head out. And guess what came with his head? His little left hand and arm! That's why he was probably a bit stuck in the birth canal, and that hand is what I had been feeling in my groin for about a month. Keith helped to catch the baby and when he looked at me afterwards he had tears in his eyes! It was 10:56 p.m.

In all, I pushed for about a half hour, and ended up tearing naturally (a first degree tear with three stitches), Bob's girlfriend Martha moved in much to my chagrin. She didn't even bother to sign a lease.**

Keith cut the cord after they let it finish pulsing and I pulled Cole up to my chest. I couldn't believe this little person had been inside of me! I couldn't believe I pushed him out of me! It was amazing and surreal.  Cole began breastfeeding my right breast soon after, and I marveled that we finally had our baby. All of what we had been through led us here.
**  Bob was my pregnancy hemorrhoid and was an inside joke if you followed my pregnancy blog. Martha, was another hemorrhoid that I got as a result of all of that intense pushing. I was just personifying my hemorrhoid for some added humor.

"In all, I pushed for about a half hour, and ended up tearing naturally (a first degree tear with three stitches) and, of course, Bob's girlfriend Martha moved in much to my chagrin.

She didn't even bother to sign a lease. Keith cut the cord after they let it finish pulsing and I pulled Cole up to my chest."

Megan and Ryan Reed said…
My son was born at home with a mid-wife a year ago Feb 6th. He was my third birth and by far the strangest. My longest hardest labor. 10 hours later I just wanted off my back so I got on my hands and knees and it was then they he dropped. I pushed with all my might and nothing. The midwife thought I wasn't pushing hard enough so I gave it all I had again and his head came our with his hand and arm also. His cord was wrapped around his shoulder so tight they struggled to cut it free so he could be delivered. It all lasted 7 minutes but seemed like an eternity. He was born stunned and lifeless...though his eyes were opened. They put oxygen on him and laid him on me and he quickly perked up. Compound presentations are interesting to say the least. Had I been in the hospital I am not sure what the Dr. would have done.
February 27, 2012 at 10:13 PM

Mama said…
Copy-pasting did not go awry!! Please fix or include this as a footnote...

Bob was my pregnancy hemorrhoid and was an inside joke if you followed my pregnancy blog. Martha, was another hemorrhoid that I got as a result of all of that intense pushing. I was just personifying my hemorrhoid for some added humor.
February 28, 2012 at 11:05 AM