A "You Will Never Have A Baby Vaginally" VBAC!

This mother's joy is palpable.  What a wonderful story.  I love too that she is willing to travel over an hour away to get the birth she want.  Sometimes that is what it takes.
You are not a lemon.
Enjoy!
First lets start with my son's birth. I had a C-section with him. It was not the birth I wanted and I was left feeling kinda cheated and struggled with some postpartum depression after that which I felt was mainly due to the birth and the hard recovery. My doctor with him told me at my first pelvic exam when I was 7 weeks pregnant that I could never deliver a baby bigger than 7 lbs vaginally.
The seed of doubt about my body and it's capabilities was planted in that moment and then I just figured the Cesarean was because my body was a lemon. Soon after his birth I started reading and researching my face off and learned that Doctors actually cannot tell if my pelvis is too small or not by feeling it. Not in labor, not before pregnancy, and not at 7 weeks pregnant. So then I began the pursuit of a VBAC.

Before we became pregnant with with our little girl I knew we needed a game plan for who to see and how to make a VBAC possible. I started messaging our CNM here in town about it and she assured me that she could see us through the pregnancy and transfer our care at the end and we could deliver down in the nearest city (1.5 hrs away). Perfect! We started seeing her and LOVED her. She assured me that my body was NOT a lemon and that we could do this. There was never doubt (at least none that I saw) that I wouldn't be able to VBAC or that I was somehow broken!

So on Monday night (11/21) I was having some contractions right before bed. They were mild. But different. I told my husband and we both laughed it off and went to bed. Throughout the night I was woken by a few strong ones, but once I would pee they were much better, so I thought "just more braxton hicks...fun!". That morning when I woke up and they were still around I decided to get checked.
I went and saw the Midwife and she said I was a good 3. That was progress. She said I was even close to a 4. I was happy with that. I went home and we planned to meet again in the afternoon. I went home and by about 11 I knew I was in labor. I was still in denial until that point. I asked the parents of the little boy I watched to come pick him up relatively soon.
I started taking showers, eating healthy snacks, and trying to rest! At 230 I went back to see the midwife and was more uncomfortable for sure. She checked me and said I was a good 4. A 4?! I've been laboring ALL day. I was pretty discouraged. But she assured me my cervix was changing and this was happening. Not sure when, but it was happening. So back home I went. Around 5 I was starting to really feel the contractions. They were actually painful and required my attention.
So Grammy came to get our little man and I of course cried as they drove away. My sweet mother-in-law prayed with me and I felt ready! Soon after the midwife came to our house to check me and said I was a good 5 and we were good to head on down to the hospital. No rush. Just at our leisure. She went ahead down and met with a friend from the hospital down there and would be waiting. So I took another bath and finished eating and packing and we headed out.

They took her to be weighed while I got stitched up quickly. I was SO thankful to have only a tiny tear that barely required any time at all to fix! They yelled over to me 8.1! I had an 8 lb baby!!! Later the nurse told us that because of the extra grams she was actually 8.2. Incredible. I still cannot believe I did it. I cannot believe I birthed my baby vaginally. And without an epidural. And without ripping to shreds. And without needing assistance. My body was able to get pregnant, carry a baby to term, know when and how to go into labor, push and deliver a baby, and then feed her completely once she was out! It is truly incredible. I have an entirely new view of my body and of my own capabilities.

Once everything settled a bit we nursed and it was blissful. She was so content to be with me. She has been so calm and cuddly and responsive to me especially. It has been a very special experience for me. I feel like it's healed some places within me and given me a very special bond with our little girl!

I must give credit now where credit is due. I could not have done this whole laboring thing without my incredible husband. He was there for me every second and step of the way. He was rubbing me, encouraging me, praying for me, reading me my birthing affirmations, and making sure that things went the way he knew I really wanted them to. I think he was the best labor partner ever!
Next, Our midwife. She was just magnificent. She knew where to rub and where it hurt and what I needed. She kept everything calm and peaceful just like I needed. It was so special to have so much time with just her and my husband and I. She was just the person I needed and wanted to be there and to catch my little girl :) Finally, Lisa. Lisa is our midwife in the city and she was just awesome. It was incredible to be able to do what we did in a hospital that wasn't ours. She was so supportive and a great addition to our little team. We certainly could not have done it without her! 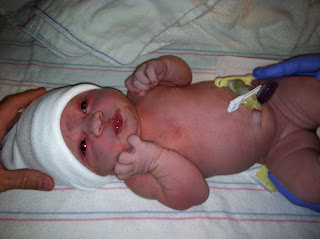 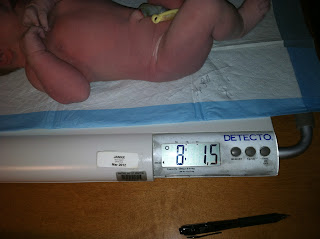 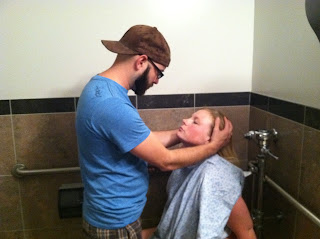 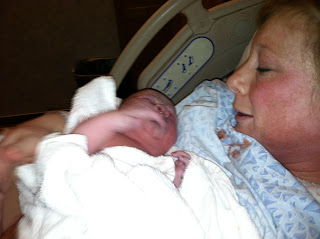 Life since the birth has been great. We were discharged from the hospital a few hrs early and were able to be a family at home on Thanksgiving :) We are 4 days out now and I feel so human. So normal considering everything that just happened. It's absolutely incredible. 4 days after my C-section we had just gotten home and I could hardly walk and was essentially useless other than to feed myself and my little boy. I cannot imagine coming home to a toddler and a newborn feeling like that!! The recovery has been a complete 180. We have been SO blessed!!!

Joyce said…
Great story. Very inspiring for others who have been told their pelvis is too small to birth a baby.
December 29, 2011 at 8:36 AM