Love birth stories like this- beautiful and difficult, all at the same time.  That is how it is supposed to be.
This mama runs a LLL group and you can see their Facebook page, here.   You can also read the birth story on her blog, here.
Enjoy!

Roo was "due" June 29. Obviously a due date is complete conjecture, but so many people base their opinions on when a baby should be born on that date... Wait. I don't want to get started on that today. Suffice it to say that I think "due dates" should be done away with and OBs and midwives should simply say, expect your baby sometime around the end of June. Ish. Because babies neeeever come on their due dates... Right? Anyway. 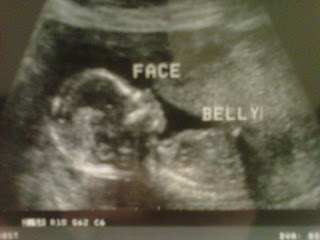 Since Bear and Monkey both came a week early, I was mentally prepared to follow suit. Ha. I have no doubt in my mind that Roo heard me say that she would be a week early and was like, "Pfft, I'll show her...." I was in the "ok, I'm seriously over being pregnant now, let's get the show on the road" stage of pregnancy. Which is weird, because every time I have a baby, I miss being pregnant afterward. So, I had been walking, doing acupressure (hey, it worked with Monkey's birth), and indulging in seriously spicy food (love it). Then I got the bright idea to make salsa.

My cilantro plant had gotten waaaay out of control and I knew I had to do something with it. My niece, who was thinking about going into midwifery, was just waiting for me to go into labor and spent the day with me on Tuesday the 28. We went to the farmer's market with Bear and gathered all our salsa ingredients. We went back to the house and made a double batch (I always overdo it), ended up with seven jars of fresh salsa (ha!) and decided that the jars now needed to be sealed and given away to each person that came by in order to get rid of at least 5.

Halfway through the pie making, I went to the bathroom. As I was headed through the bedroom on my way back to the kitchen, I felt a little trickle. Hm. Nothing to worry about. Obviously I was going to be pregnant forever.

The night went quickly by and Wes and I headed to bed early. Soooo tired. During the night, I was up several times to potty and I noticed a....er..... difference. I realize now that I was leaking amniotic fluid, but it didn't occur to me at the time...I had never leaked before.

(Male readers, either hang with me or get out while you can...)

In the morning, I experienced another first-- bloody show. Why I've never seen it before, I have no idea. It's was like a ghost with the first two pregnancies...

Roo was on her way. Yay! But no twinge of labor pains. So, I decided to go ahead and go for my morning walk with Mom, who had already predicted Roo would come on her due date. I'd been walking daily throughout the whole pregnancy in hopes of making my labor faster and easier. Hey, anything to help...

As we walked, I had some twinges, and Mom informed me that I would go into labor before 11 am. I called Wes and told him not to go to work. Back to the house.

Mom went home to get her affairs in order. I mean, she was obviously going with me to the birthing center. Are you crazy? Go through labor without my mommy? Perish the thought!

Mom and my niece walked in the door as I was sitting there.
"Helloooo!"
"I'm in here. Water just broke."

That was all I needed to say to send Wes into panic mode. Personally, I thought it was hilarious. He began bustling about, loading bags and feeding the cat...We sent the kids to mom's and agreed to meet them at the birthing center, 20 minutes away. Bear was concerned.

So I began to walk about the house. I wandered from the bedroom, to the bathroom (grabbed a towel), back through the bedroom, to the living room, into the kitch--...um... Wes was standing by the back door with his sunglasses, keys, wallet, bags... Heeheehee.

He flopped down on the arm of the couch and waited while I walked and worked through several contractions. They sped up very quickly (does that even make sense? Sped up quickly?). Finally, I looked at him and said, "We can go."  I called ahead to the birthing center to let them know we were en route. It was 11.

So I facebooked and texted all the way to the birthing center. I know, I know....

I had been constantly leaking water during the car ride. Especially when I laughed or coughed. It was ridiculous. We arrived and I stood up... -gush- ...puddles. As I waddled toward the building, a family with small children was exiting. I heard the father say, "Kids! Watch out for that big puddle!" Whaaa? I looked back and there was an actual rain puddle in the parking lot! Still, I thought it was hilarious. So I laughed and leaked some more.

When we walked in, wonder of all wonders, the nurse was looking at my *gasp* birth plan. Like, she was familiarizing herself with it. Shocker. And my midwife was waiting there, too. At that point, I was confident all was going to go as planned. Silly me. This baby obviously was messing with my head.

We were shown to a room -coincidentally, the same room in which I had given birth to Monkey- and I put on one of my own gowns. After a quick check (2cm??), I decided to take off walking, as that was how I had progressed so quickly the last time I'd been down this road. Wes and I wandered through the halls, pausing for some intense contractions. After about half an hour, we headed back to the room.

I labored on the birthing ball, walked in the room some more, and Wes and my mother took turns rubbing my back with a heated massager, and he held me as I rag-dolled (that's a technical term, you know) standing/falling into his arms for several contractions. Mom told him that I would have this baby before 5. So far, she was two for two...

Eventually I was exhausted. And it felt good to sit down. The nurse asked if it was okay to hook me up to the monitors while I was in the bed. Sure. Up until then, they had been performing intermittent auscultation of her heart tones, as per my birth plan. But sitting there, completely relaxed felt - strangely - so good. While I was there, they performed the second of three (total) pelvic checks.

After awhile, the nurse returned and checked the printout. She left and returned some time later.

"Your contractions are coupled up, and you're not dilating. Candy [midwife] thinks baby is sunnyside up. You need to swing her around. You can either get in the Jacuzzi or get on all fours to swing her down."

I wanted to get in the tub. But they needed to fill it up. So while they went to do that, I got on hands and knees to start the process.

I've never felt pain like that. Swaying my hips back and forth in between contractions... Trying to vomit over the side of the bed during. It was bad. Poor Wes. He kept trying to help, but seriously, there wasn't much he could've done. It seemed to last forever. It was probably like five minutes.

When the nurses returned to tell me the tub was full, I was sweating and seriously ready for a nap. Can we say "transition"...?

"Shall we check you again before we head to the tub?"
"YES."

I was at 9 centimeters. Screw the tub.

They began preparing for the appearance of a Roo. I was mentally trying to gather my strength. When Candy advised me to give a push to get Roo past my cervix, I had barely anything to muster. She helped by gently easing the cervix down. Then it was time to push for real. And I simply couldn't. I was so worn out.

In my mind I was thinking, "Can't I take a nap and do this later..?" But I knew that no one else could push my baby out for me. This was something I had to do alone and, yes, I could do it.

Roo was birthed into my hands at 4:22. I brought her to my chest and kissed her over and over. She nursed immediately and took both sides. She stayed on my chest for so long. Eventually, they did weigh her. 7 pounds, 14 ounces, 19 inches long. She never cried. 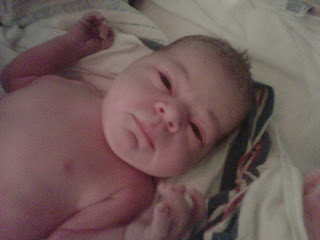 Candy said she spun in the birth canal.


While it wasn't the rainbow-farting unicorns flying through the birthing center that I had dreamed of, I worked hard for my angel. With almost exclusively family support. And I was proud of myself for what I did for my baby on her due date. June 29, 2011.