Why You SHOULD Choose Drugs In Childbirth- And Which Ones 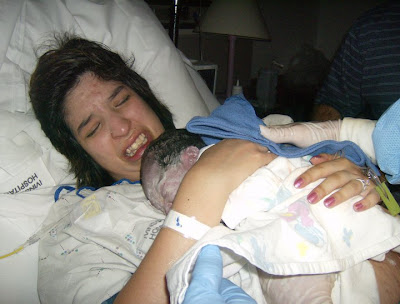 There are many different definitions for the word drug, only one of which applies to this post- When I say there are some drugs you SHOULD choose for your labor I am not referring to chemicals injected or absorbed from the outside of your body in, rather to the looser definition of drug,

1. a chemical substance that affects the processes of the mind or body. (Found here.)


Which drugs should you choose for your labor?

Natural oxytocin, known side effects are-

"Oxytocin is the hormone that causes the uterus to contract during labour. Levels of oxytocin gradually increase throughout labour, and are highest around the time of birth, when it contributes to the euphoria and receptiveness to her baby that a mother usually feels after an unmedicated birth. This peak, which is triggered by sensations of stretching of the birth canal as the baby is born, does not occur when an epidural is in place. Administration of an epidural has been found to interfere with bonding between ewes and their newborn lambs." Sarah Buckley

Hey, that sounds kind of nice! Euphoria and loving that baby!

Or synthetic Pitocin, known side effects are:

"The following adverse reactions have been reported in the mother:

I could go on, but you can find the rest here, the official FDA guide to Pitocin.

Maybe you would enjoy the effect of the drugs known as endorphins in your labor. They can,

"In addition to decreased feelings of pain, secretion of endorphins leads to feelings of euphoria, modulation of appetite, release of sex hormones, and enhancement of the immune response. With high endorphin levels, we feel less pain and fewer negative effects of stress." Via medicinenet.com

Decreased pain IN LABOR?! Release of sex hormones....this sounds good. Of course you could always opt for an epidural....

Bupivacaine, a drug common in epidurals can do this:

"Spinal anesthesia may alter the forces of parturition through changes in uterine contractility or maternal expulsive efforts. Spinal anesthesia has also been reported to prolong the second stage of labor by removing the parturient’s reflex urge to bear down or by interfering with motor function. The use of obstetrical anesthesia may increase the need for forceps assistance."
(Don't worry, there are actually more side effects than this, you can find them here.)

Or maybe you would like the side effects from chloroprocaine, another common epidural drug.
(From the manufacturers package insert no less. You can read more, here.)


"Adverse reactions in the parturient, fetus and neonate
involve alterations of the central nervous system, peripheral vascular
tone and cardiac function.
Maternal hypotension has resulted from regional anesthesia. Local anesthetics
produce vasodilation by blocking sympathetic nerves. Elevating
the patient’s legs and positioning her on her left side will help prevent
decreases in blood pressure. The fetal heart rate also should be monitored
continuously, and electronic fetal monitoring is highly advisable.
Epidural, paracervical, or pudendal anesthesia may alter the forces of
parturition through changes in uterine contractility or maternal expulsive
efforts. In one study, paracervical block anesthesia was associated with
a decrease in the mean duration of first stage labor and facilitation of
cervical dilation. However, epidural anesthesia has also been reported
to prolong the second stage of labor by removing the parturient’s reflex
urge to bear down or by interfering with motor function. The use of
obstetrical anesthesia may increase the need for forceps assistance.
The use of some local anesthetic drug products during labor and delivery
may be followed by diminished muscle strength and tone for the
first day or two of life. The long-term significance of these observations
is unknown."


Remember- you will have drugs during labor. The question is, do you want the ones your own body produces during an undisturbed and euphoric birth, or do you want the drugs that have package inserts and warnings? It is up to you.

Buzzfloyd said…
Good information and a point amusingly made.

I knew all this before I gave birth, and my aim was for a drug-free birth at home. This started out fine until I reached transition and it became apparent that all was not going to plan. In the end, it transpired that my son had a back-to-back, asynclitic presentation. If I had had expert midwives, it's possible that they could have applied manouvers that *might* have got my son out under my own power. But this position classically causes intense contractions that seem continuous (yep!) and a failure to descend the birth canal which almost always results in caesarean, or if you're lucky, 'assisted' delivery after synthetic oxytocin.

I ended up transferring to hospital with my contractions wavering, in intense pain, the endorphins having died off, absolutely exhausted. The next step if I wanted to avoid a c-section was high levels of syntocinon. So, despite knowing the risk, I opted for an epidural. It enabled me to continue pushing (ineffectually) for further hours. In the end, I just avoided a CS, with a forceps delivery after failed ventouse attempts.

This was so far removed from what I'd wanted it was barely recognisable. I feel that I missed out on the benefits of my body's natural hormonal balance. So, although I largely agree with what you're saying, I wanted to point out that it's not always a straight-up choice. But also add that, having had this experience, I want to back up your attempt to show people who think that drugs are the easy option that they might do better to avoid them if they can!

Desiree said…
oh my lord, this is ridiculous! it's one thing to choose an unmedicated childbirth for yourself, it's another entirely to try to scare other women into one. do you seriously thing moms with epidurals or (gasp!) c-sections don't love their babies as much, or as quickly, as those with an unmedicated childbirth?
September 26, 2011 at 4:38 AM

Anonymous said…
She isn't trying to scare women into it--- she stated facts. Sorry you can't handle the truth about drugs in labor and their side-effects. Not to mention that they effect a baby's ability to nurse and that OB nurses report lethargy in newborns from being drugged to death!!! But who cares as log as the mom is happy, right? Wrong!!!! It's your baby even before s\he is born and the needs of that baby should be more important. The end. Say NO to drugs should apply to labor whenever possible. It's the difference between doing it yourself and having it done to you and suffering years of post-traumatic stress over it.
September 26, 2011 at 7:36 AM

Mama Birth said…
Of course I realize that there are always times when natural birth is not the option. I simply sometimes forget a disclaimer on every post. I am sorry your experience was not what you had hoped.

Sometimes the lessons our births teach us are almost cruel, and often unfair. I wish I could give every woman the birth she wanted, but I can't. I just try to put some info out there so they are more likely to achieve what they want if it is within their power.

As far as inspiring fear in women, I simply quoted the package inserts for the drugs mentioned. I agree that they are disturbing, particularly because they are factual. Women have a right, even a responsibility to know what is being injected to their bodies while pregnant. Most won't read that while in the throes of labor. This info is out there - I am simply trying to make it easier to access.

Luckily for human kind, the drugs our own body produces during labor and birth (when undisturbed) are perfect, beautiful and have no warnings associated with them.
Hoping more women have safe and happy birth experiences! That is the point of this-
September 26, 2011 at 9:37 AM

Anonymous said…
Seriously. "Scare women"? Sorry if the truth is so inconvenient. Shame on people for sharing scary facts, hmm?

Yeah, "it's fine for YOU if YOU want an unmedicated birth"... but all those other women? Let them remain ignorant, for god's sake! How dare you ruin their choices with knowledge! They were so hoping for uninformed consent.

88Keys said…
I hate articles like this, written in a tone that mocks anyone who doesn't go along with your perfect ideals of what childbirth should be. Those are POSSIBLE side effects; it does not mean that they will happen. There are also POSSIBLE risks to drug-free, at home births.

-Say NO to drugs should apply to -labor whenever possible. It's the -difference between doing it -yourself and having it done to -you and suffering years of
-post- traumatic stress over it.

Post traumatic stress? Really? Lol. You shouldn't tell people what they should or shouldn't do during their own labor! Or try to scare them by telling them they will suffer for years if they use drugs! Get over yourself.
October 4, 2011 at 7:28 PM

Kathleen said…
You know, you didn't mention Cytotec. It's a pill that is used to induce labor. I had it with my son, and my water broke like a geyser. I looked it up afterwards (after deciding there HAD to be another way to give birth) and saw that on the package insert it says Do NOT take at any stage in pregnancy, can cause miscarriage. Which, after more research I found out because it's been known to cause uterine rupture. AWESOME right? I coulda killed my baby. I also found out that they don't use it for inductions any more like they used to. *sigh* Thankfully I've been able to heal from that horrible experience from an almost completely intervention free homebirth 3 1/2 years later.
October 5, 2011 at 12:36 AM

Unknown said…
The facts are scary. Is this your fault? No. The only way not to be scared by these drugs is pretend they don't have side effects or purposely make uneducated choices to use them. And they are not so uncommon because I have a lingering effect from my epidural. Bad lower back pain, almost 3 years later, and bad stiffness.
October 8, 2011 at 12:31 AM

The Dirty Floor Nurse said…
I would like to see a post about other drugs that may be necessary during labor, such as magnesium sulfate for preeclampsia, etc. I had a hospital birth (planned) and was planning on no drugs for pain relief, was planning on walking, doing yoga, hypnobirthing affirmations and breathing...labor for me was tolerable until I was informed that due to my preeclampsia I had to maintain bedrest, receive a catheter to monitor my urine output (which was dangerously low), and receive IV magnesium sulfate (standard hospital treatment for preeclampsia). I am a Registered Nurse also and was familiar with all of this and agreeable to it. However, due to my not being able to be up and about (which I was most comfortable doing), I opted for the epidural once the magnesium was started--only because I was seeking some level of comfort and my other options were not available to me. And the magnesium slowed contractions which meant I had to receive Pitocin. Long story short, my birth did not go according to plan, but my baby and I were both safe and he was born about 4 hours after the mag and pit were started. While I often feel like I have to justify myself by saying, "yes I got the epidural, but I didn't really want it", I often wonder what other choices I may have had--especially since I didn't really have a choice in the mag sulfate for the preeclampsia and the other protocols that needed to be followed.
June 23, 2012 at 8:47 PM