It Is Not An Insult To Be A Woman 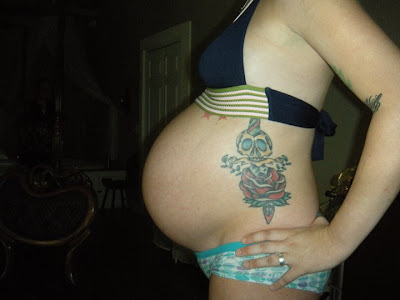 As I have watched my poor sweet (and very physically powerful) husband writhe in agony over the last few weeks from a health issue, I was struck by something. Language. Don't run away yet- The language that came to mind to describe somebody in pain, and showing pain. What are the words that pop into your head?

I will admit that the ones that pop into mine surprised me. Girly. Sissie. Take it like a man. Stop acting like a girl. (I wasn't thinking he should do that, I just felt sorry for him. Of course, I'm not that mean.)

I won't even touch the wide range of crude terms referring to female body parts that are used as insults.

I honestly consider myself a feminist. Not a bra burning, make tons of money, bottle feed because it frees you from the home, hated by Rush Limbaugh feminist. (Not that there is anything wrong with that kind of feminist, I just really NEED a bra at this point in my life and I make no money.) I am more of a housewife who thinks being a chick kind of rocks type feminist, if such a thing exists. (Although I wouldn't have a problem with Rush hating me...)

And yet when I see somebody suffering from intense pain the words that pop in my head were insulting to women, or used the feminine to denote weakness.

I have had four babies without any pain medications. Those were the most painful experiences in my young life so far. (I am not saying birth is painful, but I will say that there were moments of pain while I labored and gave birth. Don't be scared.) How did I handle that? Sometimes I just was able to be quiet and breathe. I appeared calm and "with it." Sometimes I wept in despair that it would never end. Sometimes I moaned. Swearing, (always a good fall back for me) may have crept in. Screaming definitely played a role, especially at the end.

There are a million ways to deal with pain, the intensity of labor or the trials of life. I am not sure there is a right way or a wrong way if it works for you. But I do know this. I never felt weak but I was definitely doing something womanly. It was also hard and it made me more aware of my own abilities, both as a person and as a woman.

I have three daughters. I hope they don't have to hear their gender used as a way to insult others or tell them they are weak, but they probably will. They may have already.

Women are not however any weaker than men, even though our language suggests- even perpetuates- that belief.

Sometimes women joke about how men couldn't handle labor. I think this is our way, as women, of pointing out in a subtle and sideways manner, that we are not in fact weak, frail, or easily broken. We are strong. I have never bench pressed over 350 pounds like my husband has, and I never will. But I am strong in my own way. I think that maybe we as women like to remind men of this on occasion. There are things we can do that they cannot, even though sheer physical strength is usually much greater in your average male.

Maybe the inherent sexism in our language has touched women deeper than we realize. Maybe the barrage of anti-female, women as weak, words that we hear throughout our lives sinks in a bit. Maybe that is why so many of us really believe that we will not be able to handle the experience, the intensity, even the pain, of childbirth without the influence of a man or a largely male institution to somehow carry that burden for us.

But let me tell you something. It is not an insult to be a woman. To be a woman does not make you weak. It does not magically make you incapable of handling difficult situations, enduring trials, or dealing with the sensations of childbirth. You are actually designed to do just that- handle childbirth.

Let's stop talking, even thinking, about weakness as a feminine trait. It is not. Weakness, pain, suffering, screaming, crying, bravery, strength, and courage- these are just HUMAN traits and responses, and we all have our share of each of them.

May our daughters grow up realizing that to be a woman is an amazing powerful thing- and a gift to be cherished, not an insult to be thrown.
Labels: womanhood

Unknown said…
I couldn't agree more... I am quite the feminist, but I catch myself thinking in these terms too.
I love watching BBC period drama for this reason as they are often hugely feminist infused and make the actors put fixed ideas in their place
September 8, 2011 at 1:20 AM

Anonymous said…
Oh yes, I think about that often. I have caught a few comments generally about the rain lately and how people are 'glad they don't have boys' so they wouldn't have muddy kids...well my daughter...and sons are all messy because they are kids and mud if fun so suck it!
September 8, 2011 at 3:43 AM

Anonymous said…
When I was a kid, I only witnessed other kids being called sissies and girls when they were crying. Men see emotion as a sign of weakness. It has nothing to do with what we can or cannot physically handle. Just saying.

Either way, I never look at it as a male vs female issue. Yes, men are capable of greater physical strength and women are capable of greater emotional strength--which one is better is up to you. Personally, I'll keep my emotional strength cause I have hardly any physical strength anyway, but I'm very resilient on an emotional and psychological level, and I'm proud of that. I have a lot of various strengths that I don't see in everyone around me, including other women. So I just don't see it as that black and white.

That being said, if I had a son, the greatest thing I would teach him is to embrace his emotions and not to stuff them down just because crying makes him seem weak to other boys and men.
September 8, 2011 at 11:04 AM

two pretty little skirts said…
Where is the "like" button when you need it!
I couldnt agree more... frailty and weakness are traits both men and women experience.
I am a single mom of 3 girls. I strive to impress upon them how strong they can be and teach them that anything is possible with determination. Some women may not be as physically strong as men but there are moments we can whoop some a$$ mentally :)
September 8, 2011 at 12:31 PM

Noira Celestia said…
I realized this as a child when I was about nine years old and a boy told another boy that was crying on the field "Be a man not a woman!" I told him straight up that I thought he was insulting me and he basically said all he meant was that men didn't cry and girls do so he should act like a man. I knew it was wrong then.

Something you didn't mention though is that masculinity is also used to insult people. Basically by using different words for the penis you're calling someone a jerk. Even the word jerk seems to infer that was well perhaps?
September 9, 2011 at 5:33 PM