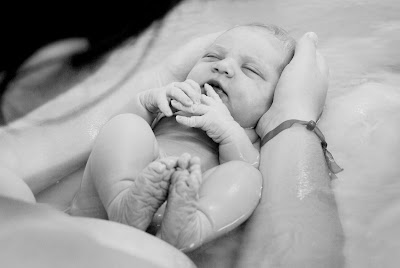 Love this one- women and babies are amazing!
Enjoy!

After my first daughters birth I was determined to have more control on my second, I chose a birth center birth, informed myself of everything I could to be prepared, breathing exercises, relaxation

Sunday the 31st July we walked back from a car boot sale, I made extra effort to MOVE and shattered myself out but did wonder if she would come later from all the moving!

I went to bed fairly early that night and woke up to some pains at 1.30. wasn't really sure if this was it or not,but had a couple of big contractions and then back pains in between which confused me, turned out the back pains were the contractions as I didn't get many big ones in my belly after that, they were about 3 minutes apart from the start, I dawdled about for a bit wondering what was happening, texted my mum to be on standby at 2.30 and went to have a bath, woke husband Oscar (who went back to sleep for a bit) and spent an hour in the bath managing to wash my hair between contractions.

at about 3.40 I got out of the bath, contractions slowed a bit to about 4minutes apart, and I called my mum, and then the coordinator(who tells you where to go in labour), who told me to go in. I then called Michaela my midwife friend, who unfortunately was working all the way in Petersfield, she said she'd try and arrange cover and switch (but unfortunately she couldn't in the end)

At about 4ish Mum and Harry arrived, we woke our daughter Maica and took her over to my sister. Then went on to the birth center.

Arrival there the midwife laughed at my sponge (though it was very useful to me!! I had craved sponges throughout the third trimester) and took me to the pool room. I asked her to get the pool going. She did a full check on me, and I was 7cms (that was my only check throughout the whole thing) and said I could get in the pool. While we waited for the pool to fill Oscar put some counter pressure on my hips which was a great help.

I got in the pool and contractions slowed for a bit (which was heavenly as it was all in my back) I practised the breathing my friend Lee taught me for the rest. As the contractions got stronger, I used the blowing balloons away that Harry taught me during hypnotherapy. I remember feeling really bored at this point between contractions! Time went slow, but yet I don't remember what happened in the next few hours. Mum read out my blessingway flags to me, contractions got stronger, all the pressure was in my back and bladder and I spent a lot of time worrying about whether I was wrecking my bladder during contractions(I didn't). I felt that if my waters would go the pressure would ease up a bit.

No idea of the time but I hit transition stage at about 8am-ish and finally asked for the gas and air. Much swearing and begging for a c-section commenced (apparently I don't remember as I was off my head on the entenox) I didn't enjoy the gas and air, and wonder had I not had it would it be easier, it slowed time down so much for me and made every emotion ten times worse! The midwife switchover happened, and I opened my eyes to see the student midwife who had been doing my antenatals, Beth. I was so happy to see her. Knowing that shes got 4 children she had naturally, just gave me that glimmer of hope for a second that I could do this. The midwives discussed that I wanted to catch the baby but there was no way I was capable by this point, in the intensity and the gas and air, so I told them that Oscar or my mum had to do it, because I knew I couldn't.

Time to push and I felt something 'go' I thought it was my waters, but it wasn't, but she must have shifted as the pressure on my bladder eased a bit. Contractions came one after the other and my body just pushed (somewhere in all that I remember thinking to myself how odd it must have sounded to Lee when I asked how I should breathe while pushing! with Maica's birth I couldn't feel anything, so I had to control my breathing, this time I had no control over my body's actions)

pushing seemed to last a lifetime, in reality it was about three minutes! the pain and pressure in my back and bum was so intense. I felt the waters sack balloon out. Her head popped out still in the sac, she was facing her Papa at the side of the pool(ear up), Oscar said she looked like a little astronaut in the bubble. They showed me in the mirror but its all a bit of a blur. Its funny as a few days before I thought how cool if she was born in her sac as its supposed to be lucky, though the pressure from all the water was so intense on my bladder it probably made it much harder.

Another contraction and I begged them to pull her out, and then they said couldn't and I had to do it, so I pushed (rather my body did), and out she came, and Oscar caught her, and passed her to me. It was exactly what I wanted.. and it makes me cry thinking about it! Matilda Felicity Dawn 8.44am 1st August 2011

We spent 15-20 minutes in the pool still attached together.I tried to latch her on but we just couldn't get it at that point. By then I'd had enough of the pains and wanted it to end so I could enjoy her. The cord had stopped pulsing so I asked for the injection. Oscar cut the cord, after Beth clamped it, and he held her skin to skin for their first cuddle while I got out of the pool. The placenta was delivered on the bed after the jab and it was a relief to get it done with. We then had more skin to skin and she had her first feed.

She was student midwife Beth's 7th baby delivered and her first girl! (first born in the sac too, aside from her second son!)

I had a shower and they then weighed her, I couldn't believe the 9lbs 11oz! We got to stay in the same room all day, Maica came and met her sister for the first time and spent the afternoon with us, my sister visited a bit later too, and we came home at 5pm!