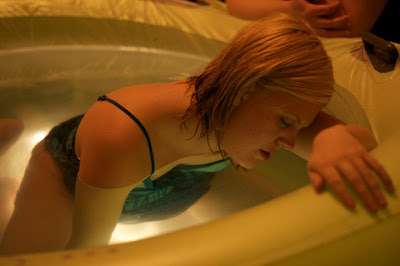 Excuse me while I rant for a moment.

My sweet fourth baby was born recently at home. It was a truly perfect birth and there was nothing I would ever change about it. One of the most touching things about it though was that because it was an accidental unassisted birth, my husband got to catch the baby. This in particular made the birth a sacred event and he felt so much love for this baby immediately because of that moment. He was literally the first person earth side to see this tiny person and behold her beauty. (What a reminder too of how important the birth experience is for both the mother and the father as a couple.)

Two days later, my husband and older children went to church. Apparently having a baby at home with only mom and dad there will make you a little famous in a small town and everybody seemed to already know what had happened.

It is interesting to note that my husband was really considered quite the "stud" for catching his wee one. But nobody said he "caught" the baby, everybody was talking about how impressive it was that he had "delivered" his baby.

In addition to all the delivery talk, my husband who is a Chiropractor (and so has a hard earned doctorate in Chiropractic) was all of a sudden being referred to as "Doctor." Despite the fact that he has treated many people and helped many people and has had a doctorate for a few years, that never merited the title doctor, but catching a baby (on accident and with some degree of panic) suddenly did earn this special title.

Now I in no way want to steal my husbands thunder. It was an amazing experience for both of us and I truly appreciated his presence and help and comfort during those overwhelming moments of labor and birth. I do however take small issue with the use of the term "delivered" especially when used in this way :

Maybe I am being a little oversensitive. Maybe my mama hormones are off kilter today and maybe I am slowly losing my mind as all these kids literally suck the fatty acids out of my body and brain. Maybe I am squabbling unnecessarily over vocabulary choices.

Maybe I have become so obsessed with the power structure of birth, the loss of female autonomy in obstetrics and what I see as blatant misogyny and undermining of woman power and feminine gifts that I see sexism where it doesn't even exist.

But I am going to say this anyway:

Maybe I should be a little more specific. Men CAN deliver babies. Men may in fact ENJOY delivering babies. That could explain the high c-section rates or the use of vacuum and forceps deliveries. In those instances I would not object to the term delivered when used in the same sentence with the word man or doctor. Sometimes it is necessary for another person, (possibly even one with a penis) to DELIVER a baby.

But- women are perfectly capable of delivering their own babies. Women labor. Nobody else can do this for them. Women push. Again, something you just have to do on your own. And women deliver their own babies into the world under their own power every single day .

Look at that amazing picture at the top of this blog post. That woman is in labor. Isn't she beautiful? Isn't she powerful and vulnerable and divine all at the same time? But more importantly, can you see that she is making a journey that nobody can make for her?

I can tell you right now that I felt every moment of that labor. I felt that baby come out of my body. I heard the primal noises I made as my body spontaneously and with great force, DELIVERED that nine pound nine ounce posterior baby. I can tell you that it was not a ride that anybody else can take for you. There are somethings in life that you must do on your own. Other people can help and support and guide but at some point, that bridge must be crossed and nobody is going to carry you over it.

So yes, I delivered our baby. My husband was there. He caught the baby. He was an important part of the birth, but nobody else delivered her but her mother.
And that folks, is how it is done.
Labels: birth

Linda Loodle said…
You make me so extraordinarily happy. My sister and I are hosting a Birth Talk tonight as an intro to natural childbirth for anybody who's interested, and we're definitely going to be telling everyone about your blog.

And I don't think you're overreacting. Casual semantics speak VOLUMES about people's ingrained assumptions and perspectives. I'm so happy for you and your husband, but DARN RIGHT you delivered that baby! GO MAMA!
June 27, 2011 at 8:40 AM

Mama K said…
Yes, "that, folks IS how it's done". And if you are lacking fatty acids or hormonally intense, well, I am nowhere near postpartum, and I wholeheartedly agree with you on this. Congratulations to you for all the hard work you did in delivering your baby, and congratulations to your wonderful husband who stood right by supporting you and was given the magnificent privilege of catching your child. That is awesome! The terminology is not something I want to start a big fight over, as there are too many other things in queue for that privilege, but I am certainly careful the language I choose, in hope that my words will influence the thinking of others. It's really good to hear someone else speak out so eloquently and passionately on this! Words do matter!
June 27, 2011 at 9:17 AM

Katie said…
So very true! I have "delivered" (I prefer "given birth to") both of my babies myself. I had the assistance of CNMs, who gave me aid or advice when needed, but *I* labored, *I* birthed, *they* caught. The second birth, I almost had an unassisted hospital birth!

*I* don't think you're overreacting, I think it's ridiculous that your husband should be given the credit for your hard work!
June 27, 2011 at 10:14 AM

cindy said…
LOVE your vibe in this post. I did graduate work in linguistics before becoming a birth professional and think language is fascinating and powerful. I also had my husband catch one of our babies. Even though he's a pilot, people kept saying he "delivered" as well . . . No wonder many women hand over their power during birth. They haven't ever heard that it's THEM who actually give birth.
June 27, 2011 at 6:56 PM

Banned From Baby Showers said…
One of my couples (ER doc and nurse) accidentally had a homebirth (unassisted) a couple of months ago and she has received more comments along the lines of "You are so lucky your husband's a doctor!". She said it was not their medical training but rather their Bradley training that got them through it! It's amazing what people will say! So happy for you and Nate. This was a great post! You worded it just perfectly.
June 27, 2011 at 7:50 PM

Kim said…
Thank you for this post! I dealt with a similar situation after the accidental unassisted birth of my fifth child. While I am so impressed with my partner's ability to catch our baby with out passing out or vomiting, he did not deliver our baby! I did. It is so important to remember that the decision to birth in a normal way, at home. and with minimal or no interventions, is empowering to the mother that makes it, and claiming that who ever caught the baby delivered it takes some of that away! Anyway, great post!
August 25, 2011 at 3:51 PM

LuLaRoe Jenni McDougald said…
Great post!
I too had the same experience; an accidental unassisted homebirth. I labored most of the time by myself. My husband basically came into the room just in time to hear me proclaim "We aren't going anywhere, she's coming!" 3 contractions/very slight pushes later, she was out! All he did was call the midwife and catch the baby!!
We're also from a small town and there was an article in the paper about us. People often comment on how wonderful it is that he was able to keep his cool and deliver his own baby and I correct them and say "Um...I delivered her, he just caught her!"
August 26, 2011 at 12:32 PM

Empowering Others to Dispel Fear said…
This may be something for you to post about later -- I know I will at some point...

But what, honestly, is the necessity of having someone 'there' with you when you birth? I've been told a huge load of bull the past few weeks about how I just had to have someone there at my birth due to the risk to the baby.

"The baby could come out too violently and you can cause spinal damage" Well, maybe if you're two inches off a concrete floor... maybe...

I mean, do I not know how to catch my own kid? Really?