Skip to main content
Labels
Posted by Mama Birth May 26, 2011

This is just an amazing and heartbreaking birth story with a surprise ending. So happy for this family that they were blessed with such a beautiful, sweet baby.

You can read more about this family here. I will share the next part of the story tomorrow.

Where Our Journey Began

Let me start by saying, I spent much of my pregnancy dreaming about my "perfect birth experience" and thanks to the support of two very special women (Angie and Andrea), my amazing husband (Marlon), and my mother - I was able to achieve my dream birth. Not only did I come out of this with an amazing birth experience, and a beautiful daughter - but also two wonderful friends. Angie and Andrea will always hold a special place in our hearts and in Kennedy's life.

My husband and I talked about having children from the time we started dating, and after eight years our dream was finally coming true. We got pregnant right after we got married. I had a great pregnancy, aside from some pretty awful morning sickness for the first 16 weeks. I loved being pregnant. It was amazing to know that I was growing a life inside of me. I couldn't get enough of her crazy movements. Some days I would just sit on the couch watching her go crazy in my belly.
I had been having contractions on and off for weeks. After a pre-term labor scare at around 34 weeks, we all figured that Kennedy would be arriving early. Here I was, less than a week before my due date, feeling like the boy who cried wolf, every time I would text my Doula, Angie, to tell her that I was having contractions. I was sure that when I did go into labor, no one would believe me – even I didn’t think I’d believe it!

I noticed a little pink tinged mucus when I went to the bathroom that afternoon. It was something new, but I wasn’t about to get excited after all the false alarms I’d had. I did text Angie, to let her know – just in case! I went about my day and around 3:30pm I noticed that the contractions I was having felt different than usual. They were consistently 11 minutes apart. I talked to my aunt on the phone for about 1 ½ hours. I continued to have contractions 11 minutes apart, and they were definitely stronger than I’d felt before. They actually took some concentration to breathe through. I hung up the phone with my aunt around 5pm, just as Marlon was getting home. I told him what was going on, but neither of us wanted to get excited. We figured it would just stop again. I called Angie to see what she though. During that conversation I had a few pretty strong contractions that I had to stop talking during. She reminded me of my breathing, and said it sounded like it could be early labor. Her advice, stay comfortable and try to get some rest.
My Last Belly Pic - 39 weeks 4 days 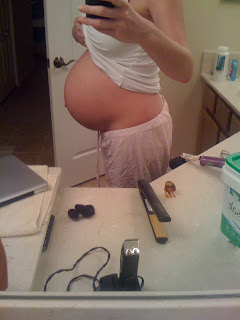 At this point, I was still convinced it would stop. I told Marlon I wanted to go for a walk. I didn’t take my cell phone, so there was no timing the contractions. Our walk ended up being pretty long, and by the end the contractions seemed a lot closer together and stronger. Towards the end of the walk I was starting to think I wasn’t going to make it! We got home and Marlon decided to make me some pasta. It was about 7:45 and the contractions were 5 ½ - 6 ½ minutes apart, 60 seconds long and actually a little painful! I text Angie again, and she suggested a warm bath. I ate my pasta and got in the tub. The contractions were anywhere from 4 ½ - 6 ½ minutes apart. I chatted online with some friends while I was in the tub. The contractions were getting stronger though and I just couldn’t be bothered with the laptop anymore. At around 9:30 the contractions were 5-6 minutes apart, and for some reason I STILL thought it was going to stop. I text Angie and told her I was screwed if this wasn’t really labor. She assured me that it was early labor, and that she had already given Andrea, the Midwife on call a heads up. Marlon and I tried different coping techniques like the birth ball, a hot shower, massage, position changes, etc. I tried to lay down and rest but the pain was worse when I laid down.

Around 11:10pm I decided I couldn’t handle the contractions on my own anymore. I called Angie to come over. She suggested that I call Andrea, the midwife on call, and see what she wanted us to do. I spoke with Andrea at 11:20 – I couldn’t talk at all through the contractions, but we somehow had a conversation and agreed to meet at the birth center in an hour. I called Angie back to let her know the update. I had a really strong contraction just as I was calling her, and threw my cell phone at my husband to talk to her.

Was this really it? I still half expected things to stop. We loaded everything into the car and left the house at 11:50pm. The ride to the birth center was rough! I was kneeling on the front seat, leaning over the back. I can only imagine what other people on the road were thinking. Marlon and I kept laughing about it on the way. He was also trying to massage my back during the contractions and I kept yelling at him to just drive carefully! We arrived at exactly 12:20am, and Andrea pulled in right behind us. We went into the birth suite, and left everything in the car. I was still convinced that she was going to tell me I was still the same 2cm dilated that I was 5 ½ weeks earlier! I laid down so Andrea could check me, and I held my breath, in anticipation, when she announced that I was 4-5cm and definitely having a baby!

Angie arrived right after I had been checked and she got right to work. Her and Marlon did an amazing job together - massaging, helping me breathe, etc. I pretty much lost all track of time at this point. The contractions started coming back to back and even Andrea and Angie were surprised by how quickly things were moving. I sent my Marlon to call my mom and have her head to the birth center. Things were getting really intense, my back was hurting and I was getting incredibly nauseous. After a little while I moved to the bed. Angie got a hot pack for my back and showed Marlon how to massage. A few position changes and a little while later I decided I wanted to get in the tub. Andrea went to fill it, and I continued to change positions until it was time to move to the tub. I got in and changed positions several times before I decided what was comfortable. I ended up squatting/kneeling and leaning over the side. Marlon held me and helped me breathe while Angie was keeping cold towels on me and pouring hot water over my back.

I started to feel a lot of pressure and at first I just tried to breathe through it. I felt like I probably still had “forever” to go. I was still laughing and joking in between contractions. In fact, I even remember talking about baby number two. Afterward Angie and Andrea said they’ve never had anyone talk about having another baby while they were getting ready to push! I couldn't stand the pressure anymore and started to push gently. Marlon kept telling me how strong I was and how great I was doing. I think I may have said that I couldn’t do it at one point, that should have been my clue that I was close! After pushing through a few contractions I told Andrea I “felt something” so she told me to feel down there. I told her that I “felt a bubble.” She said that it was just the amniotic sac bulging. I remember thinking that I must have forever if my water hadn’t broken! I remember a ton of pressure and some burning and I reached down and said “Andrea help me, the bubble is bigger.” Andrea and Angie helped me lean back when Andrea reached down and announced, “that’s the baby!!!” Kennedy had arrived with the membranes completely in tact. She instructed Marlon to catch our baby girl as she broke the sac. Andrea helped him put her on my chest. Her arrival time was 4:04 A.M. Exactly 3 hours and 44 minutes after we arrived at the birth center.
I was in shock how quickly it happened and instantly felt that natural high and feeling of empowerment that everyone talks about. I had my dream birth and I was finally holding my baby girl. A moment I had dreamed about for so long. She was absolutely beautiful and perfect in every way.

Kennedy had a little trouble breathing at first. The birth assistant missed the birth by a few minutes, so Angie jumped in to help. After a little oxygen Kennedy got pink and she was able to nurse before we got out of the tub. We moved to the bed, and Marlon and I snuggled our daughter while she continued to nurse.

A little while later Andrea said she was going to do the newborn exam. Kennedy weighed in at 7lbs 6 oz and was 19 1/2 inches long. After completing the exam, she told us she was concerned because she saw some physical characteristics of Down Syndrome, and that a lot of babies with it have cardiac conditions and that she needed to be evaluated. I was flooded with emotions. I couldn’t believe what I was hearing. My hopes, dreams, expectations were all changed with just those few words. At first I was convinced that there was just no way. We were young, healthy, had no family history. I still can’t quite put into words how I felt at that moment.

The ambulance was called. It was a non-emergent trasfer so I was able to get some more cuddle time and she nursed again. When the EMTs came, Marlon went with Kennedy and Angie followed them to the hospital. 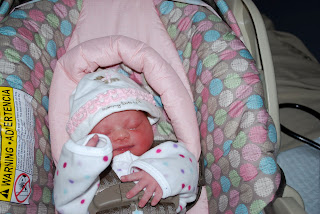 Ready for her first journey into the real world, and to the NICU.
Andrea checked me and said that I would need some stitches, to eat, rest for a little and have a shower before I could leave. I sent my mom to McDonald’s and ended up eating a sausage, egg and cheese bagel while Andrea did my sutures. This seemed to take forever. The tear was a little worse than she had first thought, and she did each stitch individually, so that it would be stronger. Shortly after Marlon called to tell me that the doctors agreed with the initial diagnosis of Down Syndrome. I was completely devastated. I took my shower, and Andrea finished things up. They got me out of there as quickly as possible, and Andrea even came to the hospital with my mom and I.
I was completely numb on the ride to the hospital. I had no idea what to think, all I knew was that this isn't how it was supposed to be. I was supposed to be driving home with my husband and baby.
Labels: birth story

Rachel said…
This brings back memories of the birth of my daughter who is 5 and has Trisomy 21. I think every mother has that initial shock and devastation when they hear that diagnosis. But we love our beautiful babies just the same. A different journey but a baby is a baby and a child is a child. No matter how different they may be. They are ours and we LOVE them. :) Thank you for posting!
May 26, 2011 at 10:58 PM