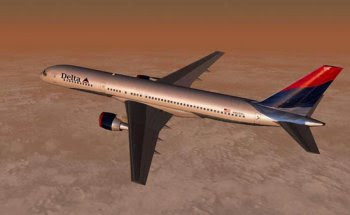 I was on a plane one time with some interesting backround noise. It happened to be a very turbulent flight so even if you were used to flying, it was bumpy and alarming more so than a normal flight would have been. A few rows behind me were two little boys, maybe five and eight years old.

I am pretty sure it was their first time on a plane and they were a little nervous, to say the least. But once we started hitting those bumps, boy did they step it up a notch.

I could hear one of them (well, the entire plane could hear them) every time things got bumpy moaning in a loud voice, "I knew it! We're all gonna die!!"

I admit, I felt sorry for these boys, but it was really kind of funny. It was so cute how worried they were. Or maybe I tried to giggle a little to release some of my own tension about the flight. What was interesting was that their fear, seemed to be contagious.

I have been flying since I was a child. It doesn't scare me on an intellectual or an emotional level. Still, to be in an enclosed space with another human expressing very real fear inevitably instills some fear in those around them- even if you know it is irrational and especially if it is already a somewhat nerve racking situation.

If you are wondering what the heck I am talking about, I'm getting there.

When I talk to birthing women we call this the "dead baby card." It is the threat, given by an obstetrician, that your baby or you or both of you, are in imminent danger of death- IF you don't do one of the following:

~Get induced~
~Take a test~
~Put drops in the babies eyes~
~Have a c-section~
~Get some pitocin to "speed things up"~
~Get some medication~
~Have the baby in the hospital~
Or any number of other things that can result in a horrid outcome if you don't follow orders.
When I teach classes, families are scared that this will be pulled on them. They haven't had any children but they have heard about this. They know they want a natural birth but far more than that, what they want is a healthy baby and a healthy mom. Despite some of the junk you will hear from the anti- natural folks, the reason people choose to go natural is because they believe it will be better than an intervention filled birth, not just emotionally, but physically for both parties.

All these parents have heard friends talk about very high tech births where there was lots of "need" for intervention to prevent imminent death. Their question is often, "How do I know if the intervention I am told I need is real or just a threat?"

(On a side note, what a sad state of obstetrics we have when people with no experience with the system are fearful of trusting their care provider because they believe they may be lied to just so somebody else doesn't get sued or inconvenienced with a weekend birth.)

Thus the dead baby card or the "We're all gonna' die" mentality that we see so pervasively not just in obstetrics but thought much of modern medicine today. This could also be called fear tactics or psychological warfare or manipulation if used inappropriately when there is not a real pressing risk.

The truth is that this isn't actually an obstetric lie - we are in fact, ALL GOING TO DIE. I hate to be the bearer of bad news because we all fear death, particularly that of our children. It does however happen.

Maybe this is why the threat of death carries so much weight. It is real. We all know somebody who has died or lost a child or miscarried. This could happen to us.

So my answer to people when they wonder how to know if this is a real or imagined threat is this:
Do everything you can to stay low risk. Eat well, take care of yourself, study, learn, do your exercises, practice relaxation so that medications are not needed for you to relax. Find out the true risks and benefits of obstetric interventions.
Then, choose a care provider that you can truly trust. You may want to ask around, get good references, get to know not just the care provider but the birth place policies, ask them questions and at some point, trust your intuition.

In the end though, there is some inherent risk to birth. This sounds awful to say, because I actually believe that birth is also inherently safe, normal, natural and everyday. I am not saying we shouldn't trust birth. But we must realize that there is an element of it that we can not control.

We must also realize that medical professionals are often people who have seen things go terribly wrong, sometimes quickly. Their fear, is often real. Does this make them bad people? No. It makes them people well trained if things go wrong. Sometimes though it also makes them people who have never seen normal natural birth or who are trained so well in pathology, that they see it everywhere.

We all have to feel comfortable with the risks we take in birth. They exist. Are there risks to going post dates? Yes, there are. VBAC- yes again. Home birth- for sure. There also happen to be risks associated with induction, repeat c-section, and hospital births in hospitals that have 30, 40 or 50% c-section rates. What risks are you comfortable with? Which risks are more risky? Do some intense research, you might be surprised how statistics get twisted around when somebody is trying to convince you you need something. What risks seem most real to you? How much do you trust your care provider?

Back to my story in the beginning though. Is there risk in flying on a plane? Yes. Are we all going to die? Yes again. (And here is the important part) Despite the relative safety of flying with the inevitable risk of death, is it fun to be on a plane with somebody who keeps reminding you that death is on the horizon? Does that mentality encourage rational decision making? Does it encourage emotional upset and fear that is unnecessary? Is the "We're all gonna' die" sentiment something you want to be part of your birth?

Momma Jorje said…
Great post! I would just add that when researching, be prepared with the questions to ask for each possible intervention.

What will happen if I refuse this? What are the risks involved in this intervention?

madasaspoon said…
"you might be surprised how statistics get twisted around when somebody is trying to convince you you need something..."

Unknown said…
You know, I think a lot of modern medicine, not just in childbirth and pregnancy, but specifically when women are concerned, is like the clove of garlic for vampires: they're not sure it will help, there's no danger just yet, but at least they're doing something! At least they have that wondrous clove of garlic that has yet to be double blind tested... That's bullshit. Medicine isn't about the care providers mental wellbeing, it is about the patient's health.
May 6, 2011 at 6:16 AM

M said…
Good post! I definitely understand this. I think its terribly sad when the fear is being instilled by your own family members rather than your obgyn!!

I became pregnant unexpectedly. Yet, I wasn't really afraid, just extremely happy and excited. I had desired to be a mom my whole life.
It can be scary to find out you're going to be a mom when it wasn't planned! Yet, I wasn't that afraid- I was so excited and already looking up pregnancy saying t-shirts and baby onesies online! This was my dream!

And as I was doing that, my older sister who had just learned of my pregnancy, said I may not carry the baby to term!! (Simply because I was not married.)

Girls, can you imagine hearing that? And when you have pregnancy hormones?

There is no reason for someone to say something like that. Encouraging me to fear?? If someone is clearly happy and planning for the best, why would you want them to prepare for the worst? (I guess it is similar to the obgyns, huh?)

From then on, I was afraid to have sex. Careful about everything little thing. It probably was not fun for my boyfriend to be on a plane with me who kept reminding him death could be on the horizon! Its very sad that someone would say something like that to their own sister and take the joy out of their pregnancy. And instill fear instead. That mentality does NOT encourage rational decision making- I decided not to have sex because it might cause a miscarriage.
October 14, 2011 at 8:59 AM