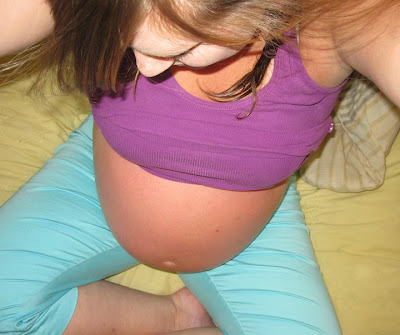 I just love it when babies are born before their "inductions"! This mama seems so calm and comfortable with her labor. It is wonderful to hear a hospital birth story that goes well. Enjoy!

I wanted to start off by saying I had VERY little support with my choice for natural child birth. I had family telling me I was crazy. One acquaintance actually told me point blank that I wouldn't be able to because she couldn't. I will not say that these comments didn't scare me, but I made it through in the end.
I had braxton-hicks contractions for a few weeks. They always started around supper time. We were out to eat on a Tuesday, with family when they started again. I ignored them because I believed them to be normal braxton-hicks. When we got home at around 7:30 I began timing just to be sure. They were lasting about 30 seconds and were coming every 3-5 minutes. They slowly began tapering off.
I decided to start getting my hospital bag ready. An induction had been scheduled for Thursday morning, so I was ensuring we were prepared. I decided to call it an early night and was in bed by 9. The contractions woke me up at 11 pm. They were lasting a little over a minute and were about 3 minutes apart. I decided that still wasn't close enough, and grabbed a bottle of Gatorade and went back to bed.
I woke up again at 1 am and had my husband time them for me. They were now every 1-2 minutes and lasting a minute and a half. After an hour of timing I called my OB/GYN who told me to come on in. I was not in any pain at this point. I had to breath through a couple of the contractions, but I wasn't doubled over.
We arrived at the hospital around 3:30. The nurse had issues checking my cervix. They try to check in between contractions, but mine were coming too fast. I was 6 cm dilated when she was FINALLY able to check. I informed her that I was intending on going natural. She was so supportive, and told me she believed I could do it.
By 8 cm my water still had not broken. The doctor's finally decided to break it manually. My OB arrived soon after that. She was shocked to see me sitting up, watching TV and talking. I think she was expecting a crazy woman begging for drugs. We actually had some polite chit chat about how her evening was, and that I was sorry to wake her up early.
I started pushing at around 7:30 am. Things were not progressing very well and I was starting to get worried. The baby was not coming down into the birth canal. The nurse had me lay on each side for 2 contractions. This is where I was giving up. I actually told DH that I didn't want to do this anymore. As if I had a choice! HEHE! This position was just painful for me. Even with counter pressure from DH and the nurse it was still painful. It was worth it because it worked like a charm! He moved down into the canal, and the pushing was now affective. I am so glad that I know this trick now, so I will be prepared if this happens again.
After his head came out the body only took one push. I remember hearing the shoulders were the worst part, but for me it was the head. My son was born at 9:05 AM on his original due date. 21.5 in and 8 lbs 2 oz.
My doctor and nurses were so awesome. I think that is a big part of why my experience was so great. I have so much confidence now, that I am looking forward to my next labor.
Labels: birth story

Murphy's said…
fabulous - lovely story. A gentle reminder that I need to finish writing mine! LO is now 14months!
We had similar births, and I love hearing that you are excited for your next labour! ME TOO!
Congratulations on your LO, and a beautiful birth.
xo
March 2, 2011 at 8:58 AM

Momma Jorje said…
I love being pregnant and I love birthing! My children are 20, 12 and 1½ years old!

I did not know that on-your-side trick. For me it was getting me to all-fours. After spending the final weeks in proper position for birth, my DD had turned around in time for labor and would not turn back! The all-fours position worked like a charm for me!