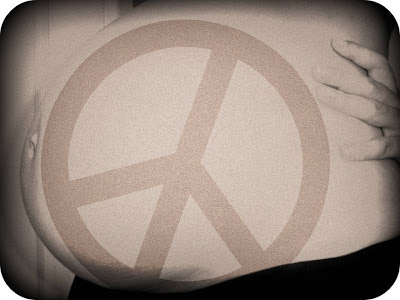 Just wanted to share this beautiful unassisted birth story today from one of our mamas. She just had a doula and a best friend assisting. There is something magnificent about birth without the worry of intervention. Hope you enjoy it and congrats to mom and family! ~/~

It's been a week now since Alana was born and already the memories seem a little bit fuzzy.

After what felt like days and days of warm up contractions and false starts I woke up Saturday morning to some indications that this would be the day things finally got going. I immediately texted my best friend Sarah so that she could come spend the day with me and help keep me distracted and phoned my doula Arie to let her know I expected to be calling her back to come join me later that day.

All morning contractions were steady but mild and didn't seem to be progressing. By the time Sarah joined me around lunch time my kids were driving me mental and it felt as if the contractions had tapered off again and I was wondering if I had been wrong and this was just another false start.

Sarah suggested that I send the kids away for the afternoon to see if we could get things moving again. After initially resisting the idea I had my brother and sister-in-law take the kids home with them. Sarah immediately went into annoying personal trainer/labor coach mode. She instructed me to start walking the stairs 2 at a time. Knowing she not only meant well but was absolutely right off I went to walk the stairs. Immediately contractions started again and they were not only stronger but closer together. I refused to time the contractions and even knowing that Sarah was I asked her not to tell me because I didn't feel that information would help me just go with the labor.

I had decided before labor started that laughter would make excellent medicine so in between stair walking trips Sarah and I watched a stand up comedy video. Contractions progressed all afternoon and before long I gave up on the stairs not feeling like they were necessary any more.

Dinner time was approaching and Sarah had plans and was thinking about leaving. I was still in denial that I was actually in active labor although I was clearly having to "work" through each contraction. I called Arie to let her know that it was time for her to come join me thinking all this time that Sarah would be leaving for a few hours. I had a thought though, and shared it with Sarah, that if things kept up the way they were going I would probably have a baby in about 3 hours. Sarah decided to stay. She and I worked though more contractions while waiting for Arie to arrive. I think it might have been about this point that I finally admitted this was really it and baby was definitely coming soon. Still, I had experienced slow labors in the past and at the back of my mind was still thinking there was a long way to go.

Arie arrived not long after this. She immediately asked that we start filling the birth pool. Not even thinking that things were getting that far along I was skeptical but thought that it would probably take a while to fill it anyways so we might as well get started. It didn't take that long to fill after all but by now I was beginning to vocalize through contractions so went along with the suggestion that I might as well get into the pool and see how things went.

I had been a little worried that things would slow down when I got in but in fact the opposite happened. I don't know if contractions got closer right away but they did immediately get stronger. I tried out a few positions to figure out where I would be most comfortable and once I found that position I didn't have much time left for thinking at all between contractions. It seemed to me that they were very very close together and getting very very strong. I was beginning to vocalize really loudly and also started feeling like pushing just a little bit at the peak of the contraction made them feel more manageable as did Arie's constant gentle reminders to keep things low. Every time I began to let the contraction take control from me Arie would gently help me turn it around and I was back in control and moving things along consciously.

Throughout this time Sarah was constantly along side me as my physical ground. As each contraction ramped up I would cling onto her waist and use her for physical support. With no concept of time I feel like all of these things happened quite quickly and really hard labor didn't really last that long for me. There came a time when I remember looking at Arie, one of the few times I actually opened my eyes, and said it felt like a ring of fire.

I believe this was a cervical feeling as I pushed the last of the cervix away as I pushed through the end of that contraction. Just after this something changed as I felt baby come down into the birth canal and immediately I began full body uncontrollable pushing. I would pull on Sarah from behind me and push into Arie in front of me. I have no idea how Arie managed this as I was pushing so hard and had no control over that at all. Only 2 contractions like this later I reached down and felt a fully birthed head. I didn't even stop to think about anything. I just pushed a little bit more until I could feel shoulder and the next thing I know I am pulling my very alert bright pink baby out of the water.

I don't think baby was even out of the water when I hear my husband, who has been in and out of his computer room during much of the evening say, "what is it??" My first thought was when did you get here? Right after that I checked and told him it was a girl. Sarah then tells me its only 9:30pm so I asked someone to call and have Olivia, my 4 year old, brought home so she could meet her new sister. We let our other daughter Alexis, who is not yet 2, spend the night at her aunt and uncles house.

All in all my immediate impressions after the birth were that the whole experience had been less difficult than I anticipated and gone much faster than I had thought it would. I like to believe that the loving support I received throughout the experience are what make me feel that way and not actually the reality of what happened and if this is the case I am perfectly happy to keep my fuzzy brained modified memory as actual truth. That was the most amazing thing that has ever happened to me and I am very very grateful to the two amazing women who helped make it such a perfect event.
Labels: unassisted birth