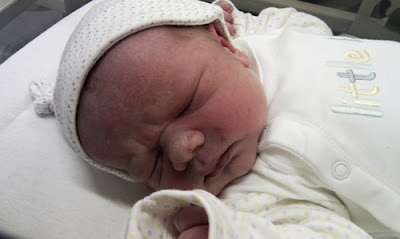 Welcome to another birth story day!
I love this birth story because it is a joyful healing birth for the mother and it is a hospital induction. Birth can be beautiful as long as mom feels validated and safe.
Enjoy!


My first birth, to my oldest son, did not go to plan. I won't go into why, or what happened, only that I was left with a form of post traumatic stress disorder, where I still occasionally get flashbacks. But when I got pregnant with my second child, the further on in pregnancy I got, the more important it was for me to come away with a positive birthing experience, something that I should have got with my firstborn, but didn't.

During my pregnancy I was diagnosed with gestational diabetes, and on consultation with the doctors specialised in diabetes during pregnancy and birth, I was informed that it was in my best interests to be induced at 38 weeks, and that a home birth was not advisable. Knowing my rights, I did think about refusing. I thought hard, for several weeks, about what I wanted, what I needed from the birth, what was really important to me. In the end I decided to accept induction at 38 weeks, and although I was apprehensive about the induction process, I decided to go in with a birth plan which detailed what I wanted to happen in worst and best case scenarios.

So, at 38 weeks and 2 days, I went into hospital as planned for my induction. I was shown into the ward, and shortly after I got settled in, I was informed by the midwife on duty that inductions had been postponed due to the labour ward being busy. But she wanted my baby to be monitored for at least half an hour, so I was hooked up, and checked on regularly over the next hour. She kept coming back and saying the baby was still asleep, so she wanted to wait until he had woken up. Finally, at 9.30am she came back and was happy with the reading.

She then also informed me that she was allowed to start inducing again. So she inserted the first tablet then and there. I was monitored for another hour after this, and then once being allowed off, I was encouraged to walk around to get labour started. Walking around the hospital grounds with my husband, I noticed that I was getting pretty much what was a constant braxton hicks contraction. The tightening did not go away and come back at all. But it was bearable, and I only went back to ward because my legs were getting tired. I sat on my birthing ball and started bouncing away, and pretty soon after that, it led into contractions, with a definite beginning and end.

When my mum showed up (who was my second birthing partner), we sat and chatted, and I bounced, while my husband went home to deal with some things there, we had agreed that once things kicked off, I would call him in. As the hours went on, my contractions were still coming, and gradually getting more intense. I started having to breathe through each one as it came along, and began to time them. They weren't like clockwork, but they were coming between every 2.5 and 1.5 minutes, and lasting for upwards of 40 seconds, sometimes as long as 70-80 seconds. I texted Jonathan asking him to come in, I remembered this level of intensity right towards the end of my labour with my firstborn.

At around 3pm, less than 6 hours after the first tablet was put in, the midwife came and monitored me again, agreeing that my contractions weren't regular, but suggested doing an internal to find out what was happening. I consented, and she found me to be around 3-4cm dilated, with bulging waters. She didn't give me another tablet, but as I was still contracting well, around 4pm, she took me down into the delivery suite.

I had brought along my CD player, and my hypnobirthing Cd's from when I did the course with my firstborn, and so in the delivery suite, I had my Cd's playing, the blinds closed, so it was dim, and I was sitting bopping on my birthing ball. When I got a contraction, I would stop bouncing, close my eyes, and retreat inwards to breathe through it, sometimes stopping in mid sentence. The midwife who was dealing with me was called Cathy. She was a lovely no-nonsense woman, with shoulder length dyed blond hair, and sensible face. She would come in to check my baby's heartbeat, or ask me what my blood sugar levels were, and stop for a moment, and say "Isn't it lovely and relaxing in here? I wish I could stay in here all day!"

She would ask me how my "pains" were, at which point she would tut at herself, for having forgotten in my birth plan I had asked her not to mention pain. I told her that using the word contraction was fine. And I told her, in all honesty, that I wouldn't describe them as pains anyway. They were intense tightenings, yes, but not pains!

At 7pm, she asked me when I would like her to check me over again and give me another internal. She suggested 7.30, and I asked her to compromise and say 8pm, to give things a chance to get going. She agreed, and when she left I laid down on the giant beanbag that had been brought in from the lounge room, and asked my husband to put on the rainbow relaxation CD.

These last few hours, for my husband and my mum, were spent chatting to each other, or to me, and in my mum's case, knitting! It seemed to me they must be incredibly bored! Anyway, as I relaxed and listened to my CD, I became aware that my contractions seemed to be easing. When, at 7.30pm, the CD finished, and I got up, I realised that it wasn't just the relaxation dumbing down the intensity, but that they had indeed eased, and slowed. I bounced, and hardly anything was happening!

We walked to the midwife station, and I informed Cathy who was stood there, that my contractions had died down, and she suggested I went for a walk to set them off again, and she would come in as planned in half an hour. So off we went, and sure enough they started to pick up, but had eased off so much I didn't need to breathe through them, or stop walking! We got back to the delivery suite about 5 to 8, and with my contractions still not as intense as they were, continued to bounce on my ball.

At 8pm, Cathy came in, and did an internal on me. I was still 3-4cm, and I told her I was happy to have my waters broken. She seemed rather apologetic, but did say "you have come in to have an induction, so we should really try and speed things along", but I was more than happy at this point, rather than spend a longer time, and possibly more intrusive measures needed later on.

My cervix was well back, and for her to break my waters meant it was very painful for me, so at this point I used the gas and air. With my waters soaking through the bedsheets, and going everywhere, (and Cathy joking about if I'd been in Marks and Spencer at the time, I'd have made a fortune!) thoughts about my first labour and birth came flooding back, and I took the mouthpiece out, and just burst into tears. Cathy (who was still trying to release more waters, and checking my dilation) immediately withdrew her hand, and my husband shot over to me and held mine.

Cathy told me I went from 3-4cm, to 5, immediately after my membranes were broken. And my contractions immediately intensified to the point of me breathing through them again, and in fact I had to groan through them too. Unfortunately, it was now 8.30, and Cathy was due to sign off at 9, so she handed over to another midwife. She told me she really wanted to see it through with me, but she couldn't.

It didn't seem very long to me at all when I suddenly felt the urge to bear down along with a contraction. The other midwife who took over from Cathy was there, and I mentioned I was getting the urge to push. A few contractions later, and still having the urge to push (I was withholding from the urge at first, to see what happened with it), and I told the midwife I wanted to get into my chosen delivery position (kneeling at the side of the bed, resting onto it with my arms). They brought the large beanbag over to the bed, and put a sheet down on top of it (the beanbag was leather so easily cleanable if anything leaked!), and a large pad on top of that, and I climbed onto it, kneeling either side of it.

With my next contraction, I bore down as hard as I could, letting out the loudest primal sounding groan I'd ever heard come out of my mouth! I could feel my baby's head coming down, and the midwife and my birthing partners were all saying things like "You're doing so well!" "Keep going!" "You're doing brilliantly!" and before long, still on the same contraction, I felt my baby's head crown, and a few seconds later, out it came.

The midwife told me to stop pushing, and to pant out my baby's body, and a few seconds later, out it came! The midwife called out "nine oh eight!" and I wondered for the briefest of seconds if that's what the baby weighed, before realising that it was the time of the birth! ;)

I was laying my head on the bed, exhausted, and my husband told me tearfully "it's a boy" - we hadn't found out the sex of the baby, and I couldn't help but feel emotional that I had my second son! I twisted around to see my baby, laying on the beanbag between my legs.

A few minutes later, and I was given my baby boy to hold for the first time. And then a few minutes after that, I lay back on the bed, and held my baby boy skin to skin, and let him perform the breast crawl, one of the most important things I wanted to experience with this birth that I never got to do with my firstborn. My induction was began at 9.30am, and I gave birth at 9.08pm, after a 4 minute 2nd (pushing) stage. A completely unassisted delivery with no pain relief after induction, and my baby boy, at 38 weeks and 2 days, weighed a very respectable 7lb 9oz. And most importantly, I got my precious bonding time immediately after the birth, which I wasn't able to have with my first son.
Labels: birth story