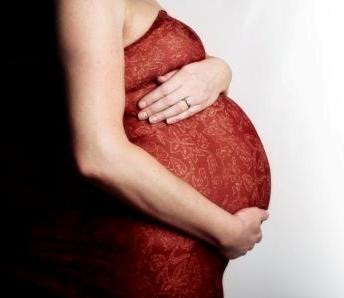 Well, if you read the blog often you will be surprised that I am posting an induction birth story. But- I think it is a really great birth story and there are a few reasons I wanted to share it. One- it is from a student of mine and their birth stories are always very special to me. Another is that I was talking to the mom through this process and felt a lot of anxiety right along with her.

But the last reason I wanted to share this birth story is the most important- this mama listened to her intuition. She did not just listen to fear on either side of the issue.I am a huge critic of induction. In fact, I think it is one of the biggest problems in obstetrics right now. But I also recognize that on occasion it is necessary.
Another thing that we have discounted in our quest for medical perfection is the innate power of female intuition and what a mama KNOWS that nobody else does. It is also important for us to remember that it is not our place to judge another woman's birth choices. We can not know what they felt was right for them or why.

It can be really hard to tune into that intuition when we are surrounded by fear and opinions on every side. I am so happy for this mama that she did what was right for her and her baby and had a great birth that she was happy with. Enjoy!

Eli’s Coming…
After weeks of doctors trying to convince us to induce labor because of some of my pre-eclampsia symptoms, we decided we would give in to their requests. We had been praying, along with so many friends, that we would not have to get induced due to the increased rate of cesarean section and intervention that comes along with it. We had been praying so much for God’s timing and for us to be okay and comfortable with the labor no matter how it happened. We finally felt comfort in heeding their warnings and taking their advice to induce labor on September 1st.
We checked into the hospital around 4pm and found our way into a labor and delivery room by dinner time. It was some kind of pot roast which smelled and sounded good at the time but made me want to throw up later. We decided to try a foley bulb induction as opposed to a hormone cervix ripening which usually requires more pitocin.
I have to admit that one of the reasons I wanted to do the foley bulb was to avoid getting an IV, which is hilarious considering what happened later. The funny thing about the foley bulb induction was that none of the nurses had ever done one before and we had to wait for someone who had ever (though not recently or often) done one.
This was a slightly less than comforting thought. So we had to wait for the doctor to come in so we just sat in the room for an hour or so. After an hour, I got hooked up to the fetal monitor and awhile after that a lab tech came in to give me a “saline lock” IV (A.K.A. my worst nightmare). It took her awhile to decide where to put it but the numbing thing she stuck me with hurt more than the IV, which I found out later was only because of the numbing stuff.
Finally,the on-call doctor came in to do the foley bulb along with four nurses who were there more for curiosity sake than to help. They seemed afraid to fill the bulb all the way. The doctor told me to say when I wanted them to stop filling it, when it was no longer comfortable. I did not expect the procedure to be comfortable and I really wanted it to work so I let them fill it all the way up, they seemed shocked that I was okay with it. It wasn’t that uncomfortable. The nurse told me to let her know if I got uncomfortable and she would come in to check on me later. So, we were just waiting for the foley bulb to start working.
After a few hours, I started have noticeable (what I thought were) contractions. The nurse would come in and look at the fetal monitor and tell me it was probably just cramping caused by the foley bulb because it did not show up very strong on the monitor. I was a little discouraged but kept on plugging along. We had our dim lights and quiet atmosphere. We were completely left alone for a long time which was fine with me.
Chris applied pressure to my lower back during these “cramps” and I did my relaxation and felt pretty good about them. Some time during the middle of the night I got up to use the restroom and the foley bulb came out. I wasn’t sure if I messed it up or if I was really dilated enough for it to come out on its own. The nurse came in and I told her it came out so the midwife checked and I was 5cm dilated, which we felt pretty good about.

They left us alone again and we continued our routine. I started out sleeping in between the contractions but it always hurt more when they woke me up because I would tense up before I awoke completely. So, I tried to stay awake but I let Chris sleep because I could handle these “cramps” alone and I thought we could be there for days and he needed sleep.
After awhile I woke him up and asked him to time the contractions because I felt like there was no time in between. When he did, they were 5 minutes long, peaked at 60 seconds and there was almost no time in between. I thought that was a little weird. Around then our nurse came in and said they weren’t sure still if these were contractions and she wanted to increase the pitocin from the smallest amount to the next increment. I told her that if I was only feeling cramps and the pitocin would give me contractions on top of the cramps, I wasn’t sure I could handle it.
Finally we decided to go with it and a little bit later they brought the midwife it to check me. She said I was 9 cm dilated. Chris and I looked at each other like, “What?!” He asked, “So does that mean she is in transition?” She answered, “No, she’s complete.” We couldn’t believe we had made it through transition without even realizing it, without any of the emotions we expected during that time!
The midwife asked me if I wanted her to break the bag of waters to get things moving and we said no and then it broke immediately. Right then, she was called into an emergency c-section and the nurse told me to wait before I started pushing. All of a sudden my body started pushing without asking me.
It was like forceful vomiting, it was completely involuntary. I wanted to wait for the midwife (sort of), but I couldn’t. I didn’t add any of my own effort to what my body was doing. I felt relief from the discomfort of what we now know were contractions (even though the monitor never picked them up).
Finally, the midwife came back and it was serious pushing time. She did warm water and oil treatments on my perineum which really put my mind at ease about pushing. I felt like the entire 2nd stage was about ten minutes and five pushes but Chris assures me it was more.
On the second to last push the midwife said he had an arm coming out with his head and I really had to get him out so I pushed harder the next time and he was out. He was born at 9:57am on September 2nd. They suctioned out his nose and mouth and gave him to me. He was squirmy and sticky and beautiful. I forgot all about everything and fell completely in love with the beautiful angel on my belly. I tried to breastfeed while they were stitching me up but I was lying down and it was an awkward angle. He was wide-eyed and looking all over, but mostly in my eyes. I cared nothing about what previously scared me to death (having to be sewn up), I could only think about our little Eli and how he was finally in my arms.
Labels: birth story

Unknown said…
Great Job Mama!! Thanks for posting even though she was induced. I think it is important to rejoice in all births no matter how they arrive.
November 17, 2010 at 10:49 AM

I really enjoyed this story, but could someone explain what the foley bulb is? I'd like to hear it from more "trusted" sources rather that just googling it.

Enjoy Birth said…
Beautiful induction story! I agree when a mom follows her intuition, she is going to know the best choice for her. I am glad she had such a wonderful birth!
November 18, 2010 at 10:36 AM

Monica said…
A foley is a urinary catheter. There is a bulb on the end that, once inserted into the bladder, is filled with water to keep it in place.

When a foley catheter is used to induce, it is placed in the cervix, and the balloon is inflated to encourage dilatation.
March 29, 2012 at 12:57 PM

Anonymous said…
No it isn't inserted in the bladder dumb ass its placed through the cervix
September 17, 2012 at 4:32 AM

Becci said…
I love how she described her urge to push. That's exactly how I described it to my husband a few days ago. I was talking to him about one of your earlier posts, "Pushing". Before I had our son, I thought the urge to push would feel like my urge to go to the bathroom. I assumed I would then know to consiously push. I remember the sheer force of my body's natural contractions taking my breath away (figuratively and literally). I really couldn't have stopped it, even if I tried.
May 15, 2013 at 10:30 PM

Unknown said…
In the original and most oftened uses of a Foley, it is a URINARY catheter. It is occasionally used to help induction. She described what the Foley catheter was made for and then said very clearly how it is used in inductions. Learn to read.
July 31, 2013 at 6:45 AM