This is a beautiful first time mom giving birth in a hospital. I love how she illustrates how helpful visualization can be in labor, and how quick and painless labor can be. I also love a good hospital birth story because I have so many students who want one but think it is impossible. It can be done ladies! You just have to be dedicated and knowledgeable.


My guess date was supposed to be June 2nd, but instead of a baby I had a prenatal appointment. At that time the midwife (Titi) asked me if I wanted her to sweep my membranes. I did not go to that appointment prepared to answer that question, so I just went along with it. I figured if she suggested it, then it's probably okay to do. [I'm not doing that again.] By the time I made it to my car I felt premenstrual-like cramping. I called Robbie just to let him know what happened and that I was feeling premenstrual.

Around 3:30pm on June 3rd I noticed something that HAD to be bloody show. I wasn't sure that's what it was at the time, though hindsight being what it is, how could I have NOT known that's what it was? Robbie got home around 4pm and I told him about it. He was so excited! I was still feeling crampy from the day before, so around 4:30 I decided I felt like taking a long shower. We were supposed to go to a church function that night, but I just felt like taking time in the shower before we left. I asked him to check on me every 30 minutes just to make sure I didn't fall asleep in the shower or something. I was planning on taking a VERY long shower.

Time went by pretty quickly in the shower, and I stayed in there until 6pm. When I got out to get ready to go, I thought, "I'll just lay down on the bed for a minute." Well, apparently Robbie fell asleep too! He came and woke me up at 7pm. Well, we knew that we weren't going to make it to the church function, but I still wanted to go to Sonic! I was starving! And I wanted one of their Strawberry Limeade drinks. When I stood up to go to the bathroom, something leaked out of me. I told Robbie, "Something just leaked out of me and I don't think it was pee!" We weren't really sure what was going on so we started making a bunch of phone calls.

At around 7:30pm on June 3rd my membranes ruptured, though I did not know it at the time that's what it was. I wasn't having contractions as far as I could tell, so I called the midwife (Debbie) to see if that's what it was. She told me a few things to do, and eventually she just said to come to the hospital to get checked out. We made it to the hospital around 9pm. The drive there was really calm and peaceful because I wasn't feeling any pain and I still didn't think the baby was really coming. I was kind of excited though. When we got there they took me to a triage area, hooked me up to some monitors and used some sort of paper to see if my membranes had ruptured. They had!

The nurse checked me (I think next time I'll ask them not to do that) I was still at 3cm. After awhile the nurse told me I was having contractions and they were coming 3-4 minutes apart. I still wasn't feeling them. Robbie left to make some phone calls and I started to feel my contractions when he was gone. This was probably a little after 10pm. [It seemed that things took off really quickly after this.]

It was funny because I was watching a Family Guy episode where Peter delivers a baby. :o) By the time he got back I wasn't having fun anymore. I actually started gagging during my contractions, and I had not started any kind of coping mechanisms. [It was a good idea that we never had a chance to go to Sonic, because I probably would have lost my dinner at that point.]

I remember at some point the nurse brought a birthing ball in there, but I just didn't feel like getting out of the bed yet. I was waiting for them to get my room prepped which seemed to take forever. Debbie came in there and talked to me for a little while. I felt kind of guilty and rude because it was very difficult to talk. I suppose she's used to women getting like that! There were a couple of other mothers she was attending at the same time. Because I was a first timer, they thought I would take a long time. Several times I was completely alone in there, but I wasn't worried, until I started to feel my waves!

Until then I had been watching the monitor and marveling at the fact that I could not feel what the monitor was showing. Robbie came back at some point and helped me start using low deep sounds. Finally my room was ready and by then it was difficult for me to walk. I'm glad I decided to get wheeled to the room rather than walk; the breeze felt really good. When I got there I really did not want to have to get out of the chair, but somehow I made it to the bed.

When I got there, I had a contraction and blew chunks all over myself! Poor Robbie, I almost got him in the face. They began filling up the tub for me. At some point Debbie came back (she had several ladies to tend to). I remember I was just standing there for some reason, and I started having a contraction and she just ran to me and hugged me through the contraction. It took a little while to make it to the tub. I had to lean over the bathroom sink and rock my hips through a wave while Debbie rubbed on my back. I finally made it to the tub and spent the rest of labor in there.

Oh boy what a relief! All I remember is that contractions never seemed to completely go away, and Robbie really helped me remember my low sounds. I tried to visualize each wave as an ocean wave entering a cave and going back out again, as if it was pulling the baby out of me. That was my favorite idea out of all the stories I read, and I tried to use it. I also tried to take each wave one at a time. Debbie (midwife) turned off the lights in there and kept telling what to relax-usually my shoulders. I don't remember what made her decide to get me out of the tub, but I got out. [I remember thinking right before they helped me out of the tub that I didn't know how much longer I could handle it, and I definitely understood why women would want relief. I also remember thinking that I wasn't getting any breaks between rushes. I'm not sure if I said these things out loud. Robbie told me I didn't talk during labor. I think the only thing I said was, "Oh sh*t!" when Debbie told me it was time to start pushing. Robbie said that was comic relief!]
When she checked me (this was the first and only time she did that) I was at 9.5 cm. I was so surprised and really happy! They got me in the bed, and Debbie got me to do little pushes to get completely to 10cm. I think she left the room for a little while and when she came back she said it was time to push. Whoa! Already? Really?

[This is the part where I said, "Oh sh*t!" because I don't think I was emotionally ready. I got ready quickly because I thought, "I don't care what happens! I don't care how much it hurts, I'm going to get this baby out! I'm not going to hold back because that will only slow things down. And if I poop on myself oh well!" Yes, I thought all of that, and then got to work. Once I got those thoughts out of the way, I was able to completely focus on the task at hand]

And then, all of a sudden, she was out! They immediately put her on my chest and left her there for the rest of everything. [They helped me latch her on, and I was able to breast feed before they did anything to her. Robbie says the first thing I said to her was, "Hey little thing!" He says that's the sweetest thing he's ever heard and he'll never forget it.]

I did NOT like when they massaged my uterus after. So Lilian Nicole was born at 2:41am on June 4, 2010. She weighed 8 lbs 3 oz and was 20 inches long. I'm completely in love with my little baby and so impressed with the work my body was able to do! I can't believe I achieved an unmedicated birth, but I am so thankful that I was able to do it. What makes me really happy is how much Robbie is happy with the care I received from the midwives. He didn't trust them at first, but now he really does! 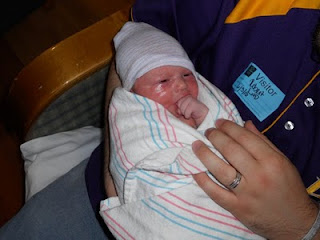 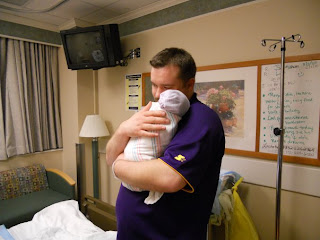 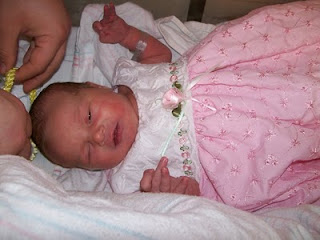 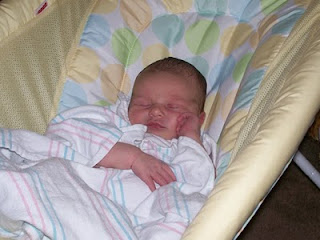 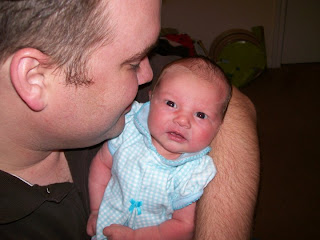