Someone To Watch Over You

I have been pondering often lately on the idea of people, particularly strangers, at birth.  I feel very deeply that the presence of others who we do not know or trust can be disruptive, even disastrous for a birth.

I have said before that one of the unspoken cruelties of modern maternity care is the crap shoot that is your birth attendant.  First, most doctors or midwives in hospitals work rotating shift work.  Chances are good that you will be birthing with somebody who you do not know well.  On top of that you will be attended by a nurse who you will almost definitely NOT know.

How does this change birth?  Do we even know WHAT it does to the process of birth?

I am surprised that this is so seldom talked about.  First, because it is a subject that strikes fear into the hearts of most laboring women, and second, because the presence of strangers, particularly un-supportive ones, must be so DAMAGING to the birth experience.

I am not a scientist or a doctor, so I can't approach this subject from that level.  I am a birthing mother, so that is how I will think about this- with common sense and sensitivity.

Birth (despite the possible pain) is very much like the sexual act.  It is intense.  It requires the same body parts.  It involves the same hormones (only at MUCH higher levels).  Women in labor who sound out their contractions often sound as if they are making love.  Birth is in fact the crescendo, the end product, and the sacred culmination of the sexual act.  You begin it with one person you love and intimately make a baby.  It ends with the birth.

You could have sex with strangers around monitoring you.  Maybe you could even climax.  It is however probably safe to say that it would be much more difficult to do so, and probably a little embarrassing.

It makes zero sense to me that we end this journey of fertility and joy in a sterile, foreign room, with lots of machines strapped to us SURROUNDED by people instructing us on how to do it properly!  And, on top of all of that, most of these people we have just met.

I was blessed with a wonderful midwife and nurse for my hospital birth.  Even though I had never met them they were important in their support of me during that time.  BUT- and this is a big but- I got lucky.

In addition, despite the fact that those attending me were supportive, kind, and knowledgeable, is it possible their mere presence altered the birth negatively?

It only stands to reason that this is in fact the case.

In fact, a well known Obstetrician, Michel Odent claims that even the presence of the father can be distracting and negative.  Here are some of his thoughts: (you can read the entire article here).


"But my youngest son was born in 1985, at home.
As it happens, at the exact moment our son arrived in the world, the midwife was on her way down the street and I, having made my excuses realising he was about to be born, was fiddling with the thermostat on the central heating boiler downstairs.
My partner did not know it, but I had given her the exceptionally rare, but ideal situation in which to give birth: she felt secure, she knew the midwife was minutes away and I was downstairs, yet she had complete privacy and no one was watching her."

I  of course cannot agree publicly with Dr Odent (being a Bradley teacher and all I happen to think that the well trained and educated father can be a huge asset to the birthing mother) about fathers being excluded, but I think he has a very interesting point- women birth best when left alone and when they feel safe.  He points out that this mom felt safe because she know that the midwife was near, but she was able to tune into her primal birthing self, because of the absence of others.

I am over and over again seeing women who are often prepared and certainly know more than most birthing mothers out there, end up with long difficult labors and the famed "failure to progress".  I can not help but wonder if this "unexplainable" difficulty in birth stems simply from the presence of others (particularly negative others) watching over mama.

I wonder if this "need" to be surrounded by foreign others is based in fear.  Yet ironically, is it possible that the presence of these expert strangers is part of the PROBLEM of birth today?

How many "necessary interventions" are simply caused by the mother and baby reacting with stress to the presence of others?  How many women fail to progress because they lack privacy?  How many births are painful because they are being watched and monitored?

I am not advocating unassisted childbirth, but I will openly condemn the common practice of fear filled strangers at birth.

We must be realistic about birth.  Things can go right OR wrong no matter where we birth.  We must choose carefully where and with whom we will birth, despite this.

We must recognize the importance of the primal birthing mother who is able to transcend her thinking self and birth without fear or stage fright.  We must have only those with us who reverence the birth process. 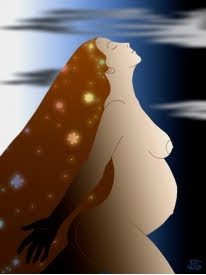 Marlene Dotterer said…
I'm new to your blog, so let me say "Hi!" before I jump in to comment. I'm also a Bradley teacher, over in Pleasant Hill. We're neighbors! I love your website, btw.

This is an interesting take on hospital births. I suspect you're right - that all these strangers and machines hinder labor, even if the mother doesn't appear to be bothered by it.

I am always amazed at the nonchalant attitude so many women have about giving birth. They have bought into the modern myth that it's a medical procedure, and as such, they don't expect personable treatment. Yet, instinctively, they still KNOW that it shouldn't be this way. I think their bodies react accordingly.

I do think most women don't want to be alone when they give birth. But they do want someone they love and trust to be with them. I think everyone in the room must be there because they add to the mother's self-confidence and joy.

It's so true, that birth is the ultimate climax of the sex act. If more people saw it that way, perhaps the emotional, intimate side of it would get more notice.
September 16, 2010 at 9:50 AM

Mama Birth said…
Hi back! Awesome that we are close to each other- maybe a Bradley teacher get together is in the future....
you are right on- Thanks for your comment-
September 16, 2010 at 10:20 AM

Sara said…
I definitely agree with what you said, and mostly with Dr. Odent. In my birth I had finally come to terms with the fact that other people were there, even though I am a shy person and quite modest. The idea of spreading my legs in front of a bunch of people didn't appeal to me much. I ended up planning for a doula, my mother to take pictures, and my husband (+ the doctor/nurse). My body knew me better than my mind, though, because when labor did start I was alone, and I decided not to wake my husband. By the time I called my doula 3 hours later I was more than halfway done, and the only thing I did with the strangers around was push her out (no stopping it at that point!). I really don't think that labor would have progressed as rapidly if there had been other people around; I loved being by myself with my baby in those last moments.

People say, "oh, when you're in labor you won't care who is there", but I really don't think that it true. I think that's what people tell themselves since they think that they don't have a choice, but I really believe that more women would be able to birth vaginally if there was more privacy in birth.
December 8, 2010 at 8:51 AM

ShineOnYouCrazyMama said…
Mama Birth - I love so many of your posts. I read this one tonight just after posting on my own blog - and I'd like to share it with you. I don't like to promote myself on other folks' blogs without being asked, but it seems appropriate - and it feels okay - so I beg your pardon as I do it anyway :) It's done in the interest of sharing a powerful birth story - more than one kind of birth - and I think you'll dig it: http://shineonyoucrazymama.com/2012/01/31/reflecting-on-the-moment-i-knew-i-wanted-to-be-a-mom/
January 30, 2012 at 11:08 PM

Bonnie B Matheson said…
I agree with this wholeheartedly. We are fight or flight animals just like horses or dogs.

in the horse world vets know that mares prefer to be alone when giving birth. Many fancy stables have video feeds so that they can watch horses foal without disturbing their progress by being physically in their space.

Don't women deserve the same respect we give horses?

For a long time now, I have been convinced that the dreaded "failure to progress" label is often the result of a stalled labor souly due to strangers interfereing with the birth. And negative strangers are even more dangerous than supportive ones. The energy we "give off" around a birthing women is palpable. If the attendents fear birth this will be conveyed to the woman subliminally.

Be very careful who you allow to be with you while you give birth. In hospitals it is almost impossible to control this. Shifts change, nurses come and go and in teaching hospials you often have to contend with students 'observing' your birth.