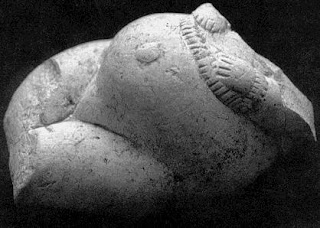 Long ago, back when I went to the bathroom alone regularly (before kids you know) I went to college. I took a class in Anthropology (the study of humans). My teacher mentioned something that got me hooked on Anthropology forever. It was the Venus.

The images of the Venus are prehistoric art figures that are actually very common. In fact it is probably one of the earliest art forms. They are found all over and nobody actually "knows" what they mean. 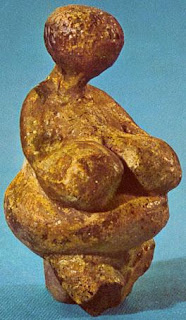 They are characterized by a shapely female body (shall we even say, chubby...) with small head and small feet. My professor mentioned that though it is not know exactly what they are for or who they were created for, people often think of them as some kind of fertility image. But what caught my attention was when he mentioned that a female Anthropologist interested in the Venus figurines was pondering on their meaning one day while she was in the shower.

She looked down at her nude form and realized that from that vantage point, she could see her curves, not her head, and her feet and legs looked very small. She postulated that perhaps the Venus figurines were actually SELF PORTRAITS, done by women. Of course back then there were no mirrors as we know them today, and so the view from one's own eyes looking down would have been how all women viewed themselves.

I love to think of the Venus figures like this. It makes me think that perhaps this art was created by women for women or even for themselves. Perhaps women long ago loved their shapely bodies. Since offspring would have been so precious and important to survival of the people as a whole, their round breasts, heavy hips, and distended abdomen would not have been something they hated as we do, but instead a thing of beauty, to be celebrated. 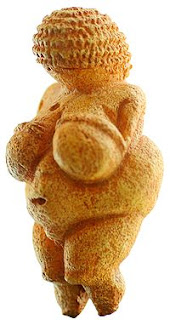 When I become pregnant for the first time I was overwhelmed with the feeling of sisterhood I suddenly felt for all mothers everywhere. It seemed like this experience of pregnancy and birth was one thing that bound us all together, no matter what other things separated us.

Birth and creating life do not just bind women of today together, but women throughout all time. How tragic that we now shun our curves, our fertility, our "fat" and our heavy softness. How sad that instead we strive to have bodies more like the ones we had BEFORE we ever gave birth.

I too am one of those women who tries so hard to erase the marks that pregnancy and birth have left on my body. But I love the Venus, because she reminds me that those marks are also universal. They tie me to women everywhere and throughout time. They tie me to my children. They prove my fertility, my femininity and my power. I too am a Venus.
Labels: body image female beauty. the venus

Unknown said…
Have you read the Clan of the Cave Bear books? Yes, they are cheesy. But one thing I always remember is the scene where a young woman who has bourn a child is getting married, and the woman who is dressing her insists that she go bare breasted, because her breasts are beautiful from having nursed, and should be proudly shown at her wedding. Awesome!
(the book is set in prehistoric Europe, and features the Venus images heavily, as icons of the goddess who is worshipped across the continent.)
August 29, 2010 at 7:17 AM

Mama Birth said…
Thanks Barbara-
Yes Maria- I read the first few. Lots of cave man sex! HA!
But I liked them and loved the dramatization of all that anthro stuff. I loved how the entire tribe nursed her baby when she could not-
August 30, 2010 at 8:52 PM

R said…
I too always loved the Venus figurines. I love the thought that these were proud self portraits. I am struggling hugely with my body after baby, the saggy belly, the huge boobs, the stretch marks. This really shows a different perspective.. Thanks:)
September 1, 2010 at 9:26 AM

Danie Nicole said…
Beautiful post!
Makes me feel much better about the post baby squishy-ness (if that is even a word) I still have. My daughter loves to play with my squishy belly.
I just don't see the point in working super hard to get back to my pre-baby body when in a couple of years I hope to be pregnant again.
June 2, 2011 at 10:16 AM

Christine said…
Maria, The Earth Children series is AMAZING!!! I started reading those when I was 15, I am 28 now and have completed them like 7 times.

I do love how often the Venus is mentioned throughout the series and even their most holy woman was so large she had difficulties getting around, but it was a sign that she was picked by the Mother to represent her.

Unknown said…
Nice post!! keep it up!!Female infertility is an extremely sensitive issue and is increasing in India due to numerous reasons. These are hormonal problems, scarred ovaries, premature menopause, and follicle problems etc. its quite difficult to select best female fertility supplement in Availability of many fertility treatments.
January 4, 2013 at 12:56 AM