I love this birth story from one of our Mama Birth fans. You might remember her from her interview a few weeks ago.  It is a little different than the other ones we have had so far but that is one of the things that makes it so incredible.  I love how this birth story goes from being a planned medicated birth to something empowering for the mama.  Birth changes us!

Monday night I got to the hospital at 6:00 to start my induction. (I had developed pre-eclampsia.)  The nurse I had was the same one that took care of me when I was in with contractions at 32 weeks.  She was wonderful.  Another nurse came in to get an IV in me (not started, just get it in so they could hook it up later) and she blew the vein.  Ouch! Thankfully she got another nurse right away to try it on my other arm.  After answering all their questions and getting hooked up to monitors she checked to see if I was dilated and I was 1 cm.  She inserted the Cervidel (which was VERY uncomfortable) at 7:10.

The rest of the night was very uncomfortable.  The cervidel made me have contractions and I could not get comfortable.  Every time I tried to move around the nurse would have to come back in and readjust the monitors.  I think I slept about an hour that night.

My parents arrived early at the hospital the next morning.  I was so relieved to see them!  At 7:00 a.m. the nurse removed the cervidel and let me get up and take a shower.  That felt great!  I was so uncomfortable from the contractions but was still only 1 cm.  Ugh!  About 8:00 my doctor came in to see me.  He said they were going to start the Pitocin and break my water soon.

The nurse started the Pitocin drip at 8:34 a.m.  The contractions increasingly got worse and by 10:30 I was so uncomfortable.  She checked me again and STILL only 1 c.m.  She said she could get the anesthesiologist to come give me my epidural  and then she would break my water.  I was so scared to get the epi.  But it actually wasn't bad at all!!  The nurse broke my water and said I was 3 cm.  Finally, some progress! My nurse told me that my doctor had called and said he was going to be the one to deliver me no matter what time it was.  He was supposed to be off at 5:00 and the on-call doctor would have delivered, but he said he would be there regardless.  The nurse asked me if I knew him other than just being his patient because he did not do that often.  I didn't, but it meant the world to me that he was going to be there.

After the epi I felt great.  I told Jay we could have as many kids as we wanted because I could totally handle this.  (Ha! I jinxed myself right there...) I was able to take a nap and the nurse would come in every once in awhile and help me turn sides so the epi would work.  The next time she checked me I was 5 cm.

Around 3:00 I fell asleep and when I woke up I was having strong pains in my back.  I realized it was 4:15 and I was still on the same side.  I called my nurse to tell her about the pain and asked her to help me move.  She came in and apologized and said the woman in the room next to me had just delivered.  I switched sides and immediately felt more pain.  I told her and she said I should feel pressure but not contractions.  Oh no, these were STRONG contractions.  She was surprised I could feel them.  She tried giving my epi a "boost" but it didn't work.  She checked me and said, "You're ready to go."  I was like "what?!" I went from 5 to 10 cm so quickly.  She said there wasn't time for the anesthesiologist to come and give me any more medication, that it was time for me to push. I was actually fine with that, I just wanted him out. It seemed like a whirlwind as they moved everything around in the room to get set up.  They called my dr and he said he would be over soon.  Both of my parents had been standing outside the room, thankfully, because I wanted my mom in there and I was afraid she wasn't there.  I had told her to leave and get lunch earlier when things were so slow and I was napping.  My dad came in quickly and kissed my forehead and told me everything was going to be okay.  I knew it was more for his sake than mine that he said that, because there were tears in his eyes when he left.

I started pushing at 4:35.  Oh my gosh it was so painful.  The contractions made me feel like I was going to pass out and vomit all at the same time.  I ended up with oxygen which helped.  My mom and Jay were there in the room.  At 4:50 my nurse called my dr and said he needed to get there NOW.  They told me I could push through 2 more contractions and then I would have to wait for my dr.  No way!!  It hurt so badly and pushing helped.  Thankfully my doctor got there in time for me to keep pushing.  I could tell when his head finally came out, and all I wanted to do was keep pushing.  Waiting for another contraction seemed like a lifetime.  Finally at 5:17 p.m.  Oliver was born.  It was the biggest relief to feel him come out.  They immediately put him on my chest and all I could do was cry and say, "My baby, my baby".  The stupid oxygen mask was still on and my mom finally took it off so I could kiss him.

It was honestly the most amazing feeling I have ever experienced.  I would do it again 100 times over just to have that feeling.  I just cannot describe it.  The nurse took him to get cleaned up and check his breathing.  He was doing this thing they called "singing" which was a strange noise when he cried.  They brought in a NICU nurse to check him but thankfully they said he was ok, they would just monitor it.  He weighed 6 lbs 14 oz and was 19 1/4 inches long.  I couldn't believe how tiny he was!!  I remember asking if he had red hair and they said yes, I was so excited.

When they had taken him and put him in the little bassinet under the heat light and were cleaning him off, I remember looking over to see what his feet looked like.  I had spent so many days and nights praying that if it was God's will than Oliver would not have clubbed feet.  When I saw that they were clubbed my heart fell for just a second.  I felt so blessed to have my baby alive and healthy, but so sad to see his little feet.  Jay was over by him holding the baby book so that we could get his footprints.  The nurse said she would get them the best she could and asked if we had known this.  Through tears I nodded yes.  I think all babies look fragile, especially at first, but I felt like his feet were super-fragile.  I was scared it would hurt him to be swaddled or touched.  I remember thinking, "God, why didn't you answer my prayers?"  And it was like God spoke straight to my heart and said, "I did answer them; its just not in the way you expected.  And you may never understand the reason why Oliver has this condition, but that doesn't mean I didn't hear you."  It was a very spiritual moment for me. 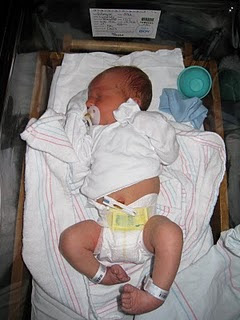 My dad and Jay's parents were allowed to come in shortly after that and see him.  I felt so much relief.  I had torn (2nd degree) but thankfully it hasn't been that bad at all.  I had some cramping that night but other than that no real after pains.  My nurse apologized again for my epidural not working properly and said if I hadn't been so far along when she checked she could have gotten it fixed.  Honestly, I am glad it worked out the way it did.  The epi got me through the painful contractions that lasted the afternoon and I was able to rest.  The painful contractions later helped me push.  I wouldn't go back and change it even if I could.

So that's my super-long birth story... It was the most wonderful experience of my life.  I feel so blessed that I had a wonderful doctor that kept such a close eye on me and knew when it was safe to bring my baby into this world.  I hope that he is able to deliver all of my babies.  I can't believe how perfect my little baby is; I never imagined it could be this good.